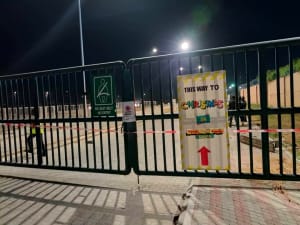 On Monday afternoon, December 26, a Boxing Day, a middle-aged female, yet-to-be-identified, was electrocuted at the Kiddies Section of Wonderland, Apapa, Lagos- an event venue meant to deliver a holiday experience of fun and excitement to guests in Lagos.

According to reports, the tragic incident caused chaos as thrill seekers rushed out of the facility.

As a result, the Lagos State Government, via the State Safety Commission, stormed the scene and sealed off the Wonderland facility, suspending all activities.

Mr Lanre Mojola, Director-General of the Lagos State Safety Commission, stated during a joint inspection with the Lagos State Task Force team that the closure was necessary to prevent further exposure of attendees, particularly children, at the venue and to prevent accidents that could result in further injuries and fatalities.

Mojola accused the event venue owner, Mr Ezekiel Adamu, of refusing to implement the commission’s safety measures despite several meetings held at the start of the project following an initial safety inspection exercise carried out on the venue to deliberate on safety infractions observed within the facility.

“It has, however, become urgent and pertinent to shut down the facility until all infractions are corrected to prevent users, particularly children, from further exposure to risk and to also ensure that other lined up events are safe for Lagos residents,” he added.

“No individual or institution is larger than the state, and we will continue to ensure Lagosians’ safety as they enjoy the festive season.”

As a result, the safety commission boss warned other operators in the hospitality sector in Lagos to stop violating all state safety guidelines, while also urging residents to socialize responsibly.

Advertisement
Related Topics:Boxing Day: Lagos closes Wonderland after a fun seeker is electrocuted
Up Next

Fire destroys ten houses on Boxing Day in Lagos, which has the highest number of fire emergencies