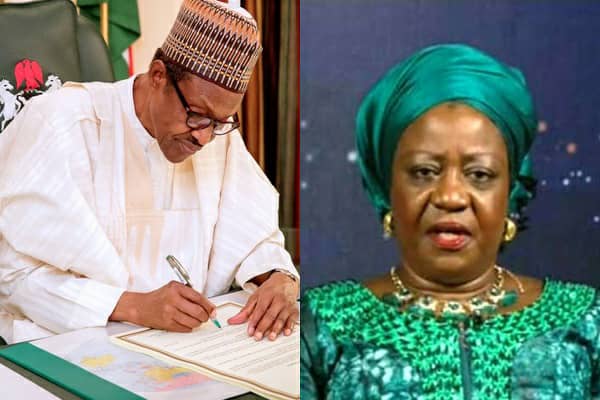 On Wednesday, President Muhammadu Buhari urged the Senate to confirm his Special Adviser on Social Media, Lauretta Ifeanyi Onochie, as the substantive Chairman of the Niger Delta Development Commission’s Board of Directors (NDDC).

The President also nominated Chief Dr. Samuel Ibukun as Managing Director for a two-year term to complete the term of his predecessor (Bayelsa State, South-South).

“In accordance with the provisions of Section 2(2)A of the NDDC Act, Cap N86, Laws of the Federation of Nigeria 2004, I hereby present the underlisted 15 names of nominees as Chairman and members of the NDDC for confirmation by the Senate,” the statement titled “Confirmation of appointments of Chairman and members of the Niger Delta Development Commission” reads in part:

Soon after the list was read, Senator Ovie Omo-Agege, APC-Delta Central, objected that Delta State was not represented on the proposed board, despite the fact that the NDDC Act requires each state to have a representative.

He urged the Executive to address the issue.

Lawan, on the other hand, promised to take up the issue and ensure that due process was followed by strictly adhering to the Act establishing the NDDC so that the screening would not be delayed.

Senator George Sekibo (PDP – Rivers East) drew the Senate’s attention to the fact that the Chamber had screened and confirmed President Buhari’s nominees for the NDDC board in 2019, and questioned why the double work, which is contrary to Senate Standing Orders.

The Senate President explained in his response that the former list could not pass due to the NDDC’s crisis at the time.

Advertisement
Related Topics:Buhari names Onochie NDDC Chairman and 14 other board members
Up Next

Malami has recovered $1 billion in looted funds since 2015