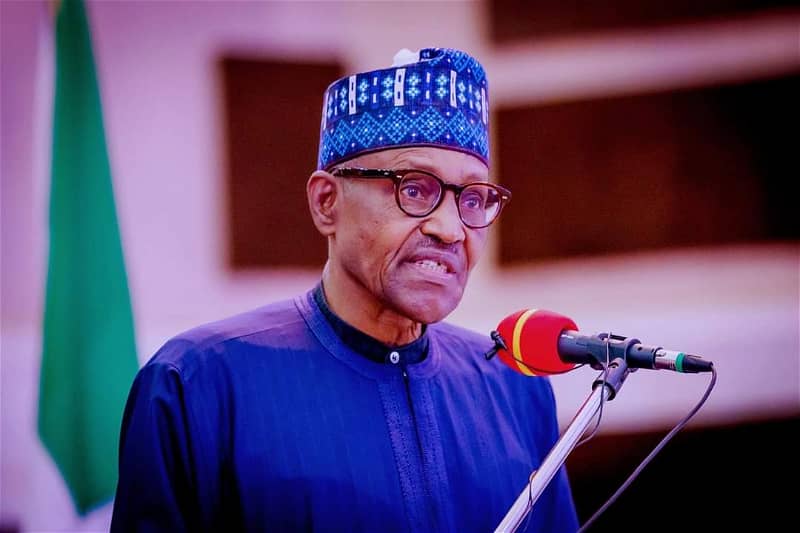 Prior to the 2015 presidential election, many Nigerians were dissatisfied with President Goodluck Jonathan’s administration because of the perceived high level of corruption, depressing economy, and alleged inability to fight the Boko Haram insurgents, who were having a field day in the Northeast geopolitical zone of the country at the time.

So, the mood of the nation was perfect for certain politicians on the flanks who were waiting and seeking an opportunity to displace Jonathan and his party, the Peoples Democratic Party. They were determined to make strategic moves that capture one of the most famous quotes from The Knights, a comedy by the ancient Greek playwright, Aristophanes, which says: “To win the people, always cook them some savoury that pleases them.”

These politicians took powerful steps that portrayed them as having a good understanding of the voting population and the one language that often resonates with them.

Riding on the back of popular sentiment across the country, they trumpeted a highly disciplined, incorruptible and earnest leader – Muhammadu Buhari, to steer the nation away from the many problems rocking it under Jonathan’s watch.

Buhari, who succeeded in displacing Jonathan, on the campaign podiums across the country summed up his assignment under three areas of focus. He promised to rid the country of corruption, end the reign of terror or insurgency in the country and revamp the economy.

Seven and half years down the line, Nigerians have expressed the view that the administration merely dished out nicely that one language that often resonated with the people at that particular point in Nigeria’s history in the form of promises.

Today, Saturday, January 14, 2023 marks exactly four months and 15 days before Buhari will leave office as the President, but the perception in some quarters is that many of these promises were empty contrary to the high hope that greeted his coming in 2015.

According to Statistics, Nigeria’s unemployment rate in the second quarter of 2015 when Buhari took over from Jonathan was 8.19 per cent. At the moment, over 33 percent of the country’s labour force is unemployed, suggesting that the Federal Government may have failed to provide ample job opportunities for the teeming youth population and its MSME programmes may have also failed to achieve the much-needed impact.

Prices of commodities have hit the roof with skyrocketing inflation rate. The Nigeria Bureau of Statistics disclosed that inflation stood at 9.5 per cent in 2015. However, the inflation rate in the country quickened for the 10th straight month in November last year to 21.47 percent; weakening the purchasing power of the Naira. The NBS in 2022 released its National Multidimensional Poverty Index Report within the year, which showed that 133 million Nigerians are multidimensionally poor.

On anti-corruption, to be fair, at the inception of the present government many hitherto untouchable personalities were investigated, arrested, and prosecuted. Those put on trial for corruption included bigwigs in the military, the judiciary, and opposition politicians.

However, the efforts became tainted with obvious selectivity along partisan lines, making the fight more of a witch-hunt as several corrupt persons affiliated with the government seemed to become the new untouchables while mind-boggling corruption goes on in the corridors of power.

Recently, the Economic and Financial Crimes Commission (EFCC) arraigned a former Accountant General of the Federation, Ahmed Idris, and three others on charges of stealing and criminal breach of trust to the tune of N109.4 billion.

The ruling party also promised to leverage President Buhari’s military background to quickly end the reign of terror in the country. They were successful in pushing Boko Haram insurgents in the Northeast into the forests, they failed to find a permanent solution to the terror.

Rather, a new variant of terrorists, tagged bandits, surfaced in the North-West: unknown gunmen, reigned almost untamed in the Southeast; and ISWAP has gradually spread its operations to the North Central and some parts of the Southwest – killing and abducting Nigerians in droves.

Some public affairs analyst say that there is perhaps no group of people that aptly expresses the reality of an old African saying that goes, “The world does not make promises to anybody” than the politicians because they are the ones who seem to have mastered the art of dealing with promises like babies – easy to make, but hard to deliver.

Nevertheless, there appears to be a window of opportunity for the government to win back Nigerians and have President Buhari’s name ascribed in gold in the annals of the country’s history.

Observers say that the President can utilise the pleasant opportunity offered by the approaching 2023 general elections to become an instant hero in the country, if he puts down his feet and walks the talk by insisting on free and fair elections in 2023.

In what seems to be a perfect resonance with this sentiment, the administration has repeatedly assured Nigerians that it will keep a date with the ‘people’ in the 2023 general elections by ensuring the polls are conducted in a peaceful and conducive environment and that their votes will really count.

Most recently, the President, in his New Year message, reassured Nigerians that the forthcoming general elections in February will be free and fair.

“In the year 2023, Nigerians go to the polls to exercise our right to vote and elect a new Administration; it is an important year for our country to ensure that we have another smooth transition of government, to whoever the people have decided upon. This administration’s landmark Amended Electoral Act will ensure that we have free and fair elections across the nation.

“We as Nigerians must also take responsibility to ensure we participate in ensuring that the 2023 elections are free and fair by not engaging in anti-state activities and other nefarious acts that may affect the run of the polls. We must also resist every attempt to be used by politicians to create unrest in any form to disrupt the elections. We, as the government will ensure such activities are met with the full force of the law,” he had said.

Nigerians appreciate the good intentions of the President for free, fair and credible elections. But there are fears that the President’s promise on free and fair elections may end up that his 2015 and 2019 election promises to end terror, corruption and revamp the economy. The President, many argue, meant well but top government officials failed to assist the President realise his promises to Nigerians. Who says the 2023 elections will be different and not face the same forces that didn’t help the fight against corruption, terro and the drive to better the economy?

Already, there are insinuations that desperate politicians are relying on the despicable practice of vote-buying to ascend to power this year. This idea is validated by the sudden attack on the leadership of the Central Bank of Nigeria over its recently introduced monetary policies that have been celebrated for their intrinsic ability to curtail vote-buying.

Added to that were plots by politicians to sack INEC boss Mahmood Yakubu who has insisted on electronic transmission of results to check election rigging. There are fears some will undermine the President and thwart the free and fair elections he promised.

The Executive Director, Centre for Democracy and Development, Idayat Hassan, said it is disconcerting that the security agencies are already creating the impression that the administration is unable to secure volatile parts of the country ahead of the 2023 general elections.

She explained that insecurity which the Independent National Electoral Commission, INEC, warned could scuttle the preparations for the general election is real and palpable despite President Buhari’s charge mandating the Service Chiefs to stop the unending waves of attacks by elements contesting the authority of the Nigerian State by December last year.

Hassan noted that in the South East, ‘unknown gunmen’ continue to undermine the peace in the region while threatening to visit mayhem on voters who dare to show up at their polling units on election day; and in the South West, pockets of agitations led by Yoruba nation separatists have similarly disrupted public order and peace, while stressing that the recent news of the abduction of passengers at the train station in Igueben, Edo State, in the South-South is also a thing of concern.

She stated that all the instances of pervasive attacks indicate that the insecurity that threatens the credibility of the forthcoming polls has not become less intense and widespread.

Hassan said, “While ongoing efforts to take the PVC collection process closer to voters at the grassroots are commendable, CDD expresses its utmost concern that the preparations for the elections may be undermined if the growing insecurity across the country is not urgently addressed.

“It is disconcerting that despite the directive of President Muhammadu Buhari mandating the security agencies to secure volatile parts of the country by December, unending waves of attacks by elements contesting the authority of the Nigerian State have not abated.”

Speaking to TrackNews Media, Comrade Deji Adeyanju, who leads an advocacy group, Concerned Nigerians, also said the APC-led government has failed Nigerians on all counts. He berated it for always making excuses for its failures to deliver on past promises, stressing that the assurances and reassurances by the President to deliver a credible 2023 general election may not be any different.

“Their promises practically mean nothing to them. Everything it promised to do when it came on board, it has been unable to deliver it even simple things like the declaration of the president’s assets which it promised, but they have refused to do it. They have made the previous government appear like saints in this country as bad as it was perceived back then.

In the same vein, the Executive Director of Resource Centre for Human Rights and Civic Education, Dr Ibrahim Zikirullahi, in a telephone chat with TrackNews Media, urged the President to walk the talk regarding his pledge to ensure credible 2023 polls.

“So far, all the indices show clearly that the government has failed to keep its past promises,” he cautioned, wondering if the promise to deliver a free and fair election will align with the past.

Meanwhile, the Chairman of the Christian Association of Nigeria, Kaduna State, Rev. John Hayab, called on Nigerians not to give up hope for a credible election despite the perceived failures of the government to keep its past promises.

He, however, explained that while the faith communities are not basing their confidence on the promises of the government to ensure free and fair elections next month, they are considering how to contribute to making the process credible.

According to him, “We are not banking on the promises of this government to conduct free and fair credible elections next month because it has not kept its past promises.

“We are thinking in terms of how we, as a faith-based organisation and responsible citizens, can ensure that the will of the people prevail during the general elections.

“To get it right this time, the government must engage more with other critical stakeholders and equally ensure a level playing ground for the will of the ‘people’ to prevail.”

If President Buhari does what he said he would definitely do to bequeath a lasting legacy of free and fair elections to Nigerians in 2023, he would not only win Nigerians over, but he would become a signpost for democracy, enjoy international recognition around the world and be celebrated as one of the greatest Nigerians to ever live.

If the forces around the president allow a free and fair election next month, then Buhari’s description as a man of integrity would make greater sense to the masses.

Related Topics:activistsBuhari’s assurance on freeclericsfair 2023 polls must not end like 2015 promises — CSOs
Up Next