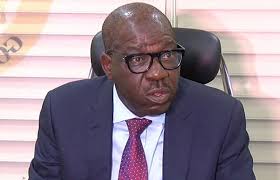 Edo State Chairman of the All Progressives Congress (APC), Col. David Imuse (Rtd.) has asked the state Governor, Mr. Godwin Obaseki to explain to people of the state what he has done with the 13 per cent oil derivation fund since his inception as governor of the state.

Last week, Rivers State Governor Mr. Nyesom Wike revealed that he was able to erect 12 flyovers across the state capital, Port-Harcourt using funds from the 13 per cent derivation arrear due to the Niger Delta states that was approved and released by President Muhammadu Buhari.

Owing to this, addressing a press conference in Benin City, capital of the state, yesterday, the Edo APC Chairman said the call became necessary because since Nigeria’s Fourth Republic began in 1999, Edo state and eight other oil and gas producing states that make up the Niger Delta have been entitled to 13 per cent derivation fund.

“This is why we are asking the Edo State Governor Mr. Godwin Obaseki to tell Edo people what he has done with the trillions of naira, Mr. President released to Edo state.

“The Governor should tell Edo people the total amount the state government received as 13 per cent derivation funds after President Muhammadu Buhari approval for the release of outstanding sums dating back to 1999.

“He should tell us the development projects in the oil and gas producing communities of Edo state which he dedicated the 13 per cent derivation funds to if any. We want a full list, the amounts involved and the contractors who did the jobs.

“The governor should also explain why he has deliberately refused to specify amount expected/received as 13 per cent derivation fund in all his budgets since 2016.”

Imuse expressed shock that Obaseki has been busy maligning the federal government accusing it of printing paper money to fund statutory allocations and mismanagement of the national economy, whereas as a deliberate policy, he has allegedly been pocketing Edo State monies by mismanaging the derivation funds.

He added: “In actual fact, Section 162, Sub-section 2 of the constitution stipulates that the 13 per cent derivation funds is for the exclusive use of oil/gas producing communities as compensation for loss of fishing rights and productive farmlands as a result of oil and gas exploration and production activities in the beneficiary states.”

Besides, the Edo APC boss also carpeted the state governor for his alleged plan to take over the NUJ premises in Benin City with the claim that the building which dates back in the 1970s on a plot of land donated by Oba Akenzua II is standing on the Benin Moats rights of way.

“Obaseki said his interest in the building is because it borders some of the most visible sections of the walls and moats in Benin city, and archaeologists and specialist architects have visited areas around the moats with a view to determining how best to assist National Commission of Museums and Monuments with the preservation of the moats,” Imuse declared.

He however, wondered if it was not the same Governor Obaseki who wanted to preserve looted Benin artefacts dating back to 1897, when there was nothing called Nigeria by building a museum at the palace of the Oba of Benin, but reneged?

“Why this sudden fraudulent interest in Benin Moat? For a man who condemns every Federal government policy at will, it is strange that he will be interested in assisting the federal government-sponsored National Commission of Museums and Monuments with preserving the moats. What a black lie? Imuse queried.

Related Topics:Edo APC Asks Obaseki to Account for Usage of 13% Derivation
Up Next