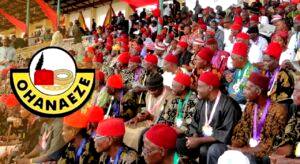 Iwuayanwu described the attacks as unprovoked and an invasion of Igbo communities.

To address the situation of insecurity in the affected areas, Chief Iwuanyawu has requested that the Governor of Ebonyi State and President of Ohanaeze Ndigbo World Wide, Professor George Obiozor, convene a meeting of South East political, religious, traditional, and business leaders to find a solution to this heinous situation.

“In the last few weeks, many parts of Igboland have experienced unprovoked attacks in some parts of Enugu and Ebony states,” the Ohanaeze Elders said. Enugu is clearly an invasion of Igboland by unknown people. According to reports that have reached my office, innocent Igbo have been killed in their own homes, their homes have been destroyed, set ablaze, and their property has been looted.

“Many Igbo, particularly along the border with Benue and Kogi states, have fled their homes and are now homeless, with many losing their lives.” Similar incidents have occurred in some parts of Ebony in states, particularly those near the border of northern states.”

The Ohanaeze elders made the following demands as part of their demands: “The chairman of the Governors Forum South East, Engr. Dave Umahi, and the President General of Ohanaeze Ndigbo Worldwise, Prof. George Obiozor, immediately convene a meeting of South East political, religious, traditional, and business leaders to find a solution to stop this ugly situation.”

“Meanwhile, I recommend that the Southeast Governor’s Forum, in collaboration with Ohanaeze Ndigbo worldwide, establish a relief committee to assist all Igbon who have recently suffered from armed invasion by strange people, as well as those who have suffered from flooding.”

“When this relief committee is established, the council of elders will appeal to Igboland’s business leaders and others to contribute to alleviate the suffering of these brothers and sisters.”

“The burden of catering for the welfare of the affected Igbo may be too great for most state governments to bear alone, necessitating the contribution and assistance of Igbo businessmen and women, as well as the National Emergency Agency.”

“In the meantime, we urge NEMA to respond immediately to the needs of those affected by these attacks.” We also call on the Federal Government to take action to stop this unprovoked and unjustified violation of our people’s rights,” Iwuanyanwu said.

Advertisement
Related Topics:Elders of the Igbo people are outraged by the killings in Ebonyi and Enugu.
Up Next

One year later, we have yet to receive justice — Sylvester Oromoni