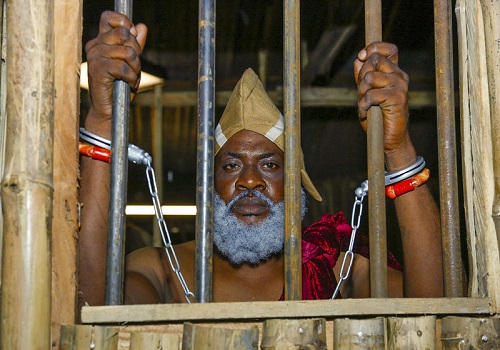 Elesin Oba, a film based on Professor Wole Soyinka’s Death and the King’s Horseman, is currently trending in Nigerian cinemas. The film is an elegant celebration of the clash of cultures and norms in a world populated by different peoples, locations, and beliefs, produced by ace entertainment impresario Mo Abudu and directed by Biyi Bandele. According to Edozie Udeze, who saw the preview.

When this incident occurred in the old Oyo Empire before and during World War II, the Alaafin of Oyo was almost like a ubiquitous authority in Yoruba land. The story of Elesin Oba, as portrayed by Professor Wole Soyinka in the play Death and the King’s Horseman, is a manifestation of the powers of tradition, custom, and culture in the lives of the people before the colonial overlords came, severing what held the people together and causing the center to collapse.

Now, Death and the King’s Horseman, simply titled Elesin Oba, is a remarkable reminder of the strong aura of the people’s beliefs before time. At the start of World War II, it was clear that white people, specifically British overlords, had done more damage to native cultures. Elesin Oba or Elesin Alaafin, son of Atiba, is assigned to commit ritual suicide as soon as the king’s death is announced. Elesin Oba is entitled to all the trappings and goodies of the palace as the commander of his army, the man in charge of his horse in times of peace and war.

His words, like a forerunner, mean a lot to the people. Where the king is not present, his presence is sufficient and as good as the king’s own. It is the prestige and aura that he exudes that causes people to hail, respect, and honor him. However, Elesin Oba is wired to begin a series of preparations for the king’s ritual death as soon as the king’s death is announced. He will not be reminded or compelled to do so. It is his binding role in the kingdom, and he is already aware of what his calling entails before assuming the position.

This ritual death is linked to the king’s ancestral journey to the world beyond. Until Elesin Oba’s time, no king’s horseman was known or recorded in history as being delayed or deeply involved in such good life that prevented him from fulfilling his duty. So, when Elesin Oba resorts to marrying and having fun, his people become concerned and suspicious. The Iyaloja, the market women’s leader, is the first to confront Elesin Oba, reminding him of his responsibilities to the people. Throughout several confrontations, she makes it clear that if Elesin Oba continues to malign or deny his place in history, history will be unjust to him. “Elesin Oba, son of Atiba!” screams Iyaloja, “rise to the occasion of your office!” Rest in peace, King George VI. Allow Alaafin to join his ancestors so that peace can return to the kingdom.”

The time’s filmmaker did not manage cultural elemental materials to produce an excellent work. From the beginning to the end, the film is infused with Yoruba cultural heritages – songs, drums, dirges, costumes, dances, foods, native arenas, you name it. The richness of these materials, properly interspersed with displays of the people’s classical elegance, makes the film profoundly alluring and remarkable.

The colorful assemblages are accentuated by the casts, the inclusion of many characters, and artists who have cut their teeth in the industry. The inclusion of Joke Silver, Taiwo Ajai-Lycett, Jide Kosoko, and other former and current members of the National Troupe of Nigeria in the film, produced by ace entertainment guru Mo Abudu, demonstrates how far the film producers went to find the best hands in the industry. Finally, you have a film that holds your attention from beginning to end.

Proper characterization, professional renditions, and the use of props in the proper proportions all contribute to the enrichment of a play or film. This is what Elesin Oba has come to represent in this case. Traditional Yoruba fabrics such as aso oke, adire, ankara, and others are featured prominently in the film. The film depicts the people’s love for what is theirs through the usual arenas or what is seen as the people’s esplanade in village square, the spacious market scenes, and places where all sorts of wares and goods are traded. Elesin Oba has espoused those elements in broader forms as a film imbued with traditions, set in an African enclave known for its commitment to the ideals of togetherness.

These are the rich heritages that the District Officer (D.O) in the person of Simeon Pilkings and his cohorts came to disrupt. Pilkings purposefully usurped the people’s belief system, in addition to delving into the nuances of the local people in many uncouth ways. Pilkings is forced to use the discretion of egungun due to his mistaken belief that African customs are full of barbaric acts. Here, he and his wife, Jane, dress in egungun regalia, prompting Jide Kosoko, the film’s Black colonial police officer, to issue a serious warning. Pilkings, on the other hand, not only interferes with the people’s daily routines, but also engages in verbal insults and abuses of what holds the people together.

In all of this, the Iyaloja does not spare the white people for their role in keeping the people down. Elesin Oba is apprehended by the white authority on the eve of his ritual departure. As the situation progresses, Olunde, Elesin Oba’s son who was sent to England to study medicine, returns home. “I have come home to witness my father’s death,” Olunde tells Jane during one of their encounters. “As soon as I heard the king was dead, I knew my father would take his place in history… Indeed, I had already mourned my father in my heart,” he adds.

“You still believe in barbaric concepts after we sent you to England,” Jane chastises Olunde. “That is incorrect,” Olunde corrects her. “You can’t come here and tell us how to keep our traditions; my father knew from the start that this was the path of tradition meant for him…” Then he recognizes his father’s voice. He goes all out to confront him, surprised that he is still alive. When he saw him in chains, he bowed his head and said, “Father, you are a disgrace.” Today, I disown you because you have disgraced not only your position, but the entire community. You shouldn’t be alive by now.”

With that, he walks out, irritated. He commits suicide in order to save his people and avert the gods’ and ancestors’ wrath. While Elesin Oba engages Pilkings in a heated back and forth argument that defies the norms, the villagers approach the prison in a mournful procession. A coffin is balanced on their shoulders. Olunde’s body is inside the coffin. The arena comes to a halt as a series of dirges plays out in a slow but measured procession. The scene is dominated by silence. After some reluctance, the people are allowed into the prison grounds. As they place the coffin on the ground, silence returns to the entire planet.

Elesin Oba becomes numb and sober all of a sudden. The coffin is flung open as the group led by the Iyaloja makes its final statements of dishonor to the Elesin Oba Alaafin. Olunde, a young man who has taken the place of honor on behalf of his people and family, has appeared. Of course, this scene, as expected, exhausts Elesin Oba. So, with his last ounce of dignity, he strides across the prison, mounts a stool, and drapes the chain around his neck. The chain strangles him to death as he pushes the stool away. Elesin Oba died before Pilkings and his companions could reach out for help. The dirges become more intense. The scenes depict Elesin Oba on a journey to meet his ancestors, who are now chained.

It’s worth noting that this film is available on Netflix. It is also shown at the Ebonyilife Theatre in Lagos and other Nigerian cinemas. It is infuriating to see how the white man’s interference in African cultures has disrupted the free flow of life in these parts before time. Elesin Oba is a winner, a film for all times, done in Yoruba with English sub-titles.

Advertisement
Related Topics:Elesin Oba debuted with a bang
Up Next

2023: I outperformed all of my predecessors – Abiodun