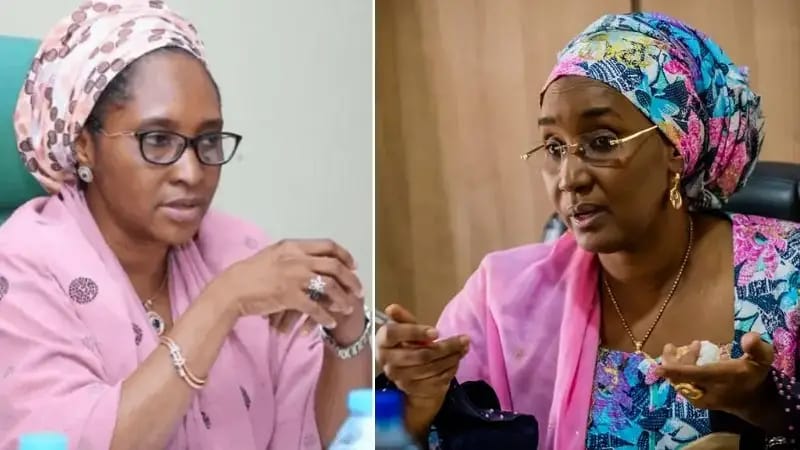 Amid the episodic theatrics that have literally characterized the 2023 budget, a flurry of staggering revelations, face-offs, denials and unconvincing corrections have continued to flow ceaselessly on the insertion of the N206 billion in the budget of the Humanitarian Affairs Ministry. The week featured yet another entertaining scene from two ministers.

It is still an affair of foggy details. It has heightened suspicions and justified the impressions of untidy jobs. Gradually and slowly, it is serrating the sciatic nerves of the budget systems, causing lacerations on the ministries and injuring the relationship walls. This is neither lofty nor edifying.

Yet, it is swiftly assuming the dimension of an infamous cliché of the more you look, the less you see. But to speak with more precision and exactitude, it is a case of the more you ask questions, the more unanswered they become.

That is the sort of quagmire, an inglorious circus the Ministers of Humanitarian Affairs, Disaster Management and Social Development, Sadiya Umar Farouq; and the Finance, Budget and National Planning, Zainab Ahmed have created, plunging themselves in it.

Yes, it stinks and still festers. And until both ministers come clean or at least, answer to the insertions of N206 billion in the budget of Humanitarian Affairs ministry, tongues will continue to wag over the inclement budgetary and financial climates they have bequeathed the country.

And the issue is heavier with the Finance Minister who by the virtue of her designation and status in the budget analysis should have all answers.

Of course, from all conventional norms, budget proposals anywhere are meticulously prepared. They are a sacred package tucked into the womb of an appropriation bill. All line items are checked and rechecked with their monetary estimates attached. Figures are hardly haphazardly dropped and allocated without defence. Budgetary processes are not grounds for the display of cavalier attitudes. This is the whole essence of parliamentary budget defence sessions. And such should be the case in the Nigerian system.

But to have a minister that says there were errors and omissions in the allocation of items and figures at the twilight of budget defence season, moreso, after an exposé by a member of legislature would naturally ignite a feeling of incompetence and the scepticism of due diligence. In a nutshell, it is scandalous.

Ridiculously so, this is where the country is at the moment with the Finance Minister and her Humanitarian Affairs counterpart locked up in a dance of the gods before the Nigerian people.

How the drama began

For better accentuation of the issue, here is a recap: The event was a Senate Special Duties Committee budget defence session penultimate week. And Farouq had appeared to defend her ministry’s budget proposal. A whopping sum of N206 billion was identified in the budget. Asked about the money, she denied the knowledge of it. Pressed to speak, she said her ministry never made such proposal in their budget forwarded to the Budget Office. Feeling embarrassed, she then wrote to the Minister of Finance, demanding explanations. Not just clarifications.

To heighten anxiety about the discovery, the ministry said that some projects for the North East Development Commission, NEDC, and the National Social Safety Net Project for which a defence was made of the money were not heeded in its 2022 budget as requested.

So to Farouq, it was rather completely flabbergasting to see an astronomical amount tied to the same project in the 2023, yet without the consent of the ministry of Humanitarian Affairs. Wonderful!

A whirlwind of insertions

The ministry is not alone in this infamous trajectory. The 2023 budget of the National Universities Commission, NUC; those of Ministry of Defence and Power also have some line items tucked in them with an allocation tone of billions of naira, yet, the main operators were not in the picture of such items.

For NUC, additional N12 billion was inserted for World Bank projects which the commission denied an affinity with. Similarly, the Defence ministry blamed the Finance ministry for the N10.8bn it saw in its budget just as the Senators said the ministry of power was totally unaware of the N195 billion inserted in its own budget. Then, Whodunnit? That’s the question now.

Miffed by the gargantuan level of these discoveries, its attendant miasma of scepticism and the passion to unravel the mysteries, the House of Representative’s Committee on Appropriation chaired by Hon. Muktar Aliyu Betara summoned the ministers alongside the Director-general, Budget Office, Mr. Ben Akubeze to a meeting on Tuesday, November 29, 2022 for explanation.

While Ahmed and Akubeze were physically present, Farouq was represented by the ministry’s Permanent Secretary, Dr. Nasir Sani Gwarzo. But his representation irked the members in no small measure that at a point, there came a motion by a member of the committee to drag Farouq to the House, willy-nilly.

Though the motion was later rescinded, the chairman of the Committee, Betara roared at Gwarzo.

He said: “Permanent Secretary, to my understanding, your minister is in town. She doesn’t want to appear before this committee and you are going into the media, going out telling them different things about our budget. She needs to come in here and tell the committee what really happened with your budget. , ,

“For your ministry, if you see that kind of issue within the budget, you would have contacted the chairman of the committee within the house, liaise with me and not go to the media. That is the main reason we called this minister to iron out the issues. We are not happy.

“Equally with the Ministry of defence. I have a copy of the letter from the Minister of Finance, written to the President, his approval to give the ministry money. I am having issues with the same committee here. Both committees in the house and senate. They want to remove the money. If he says he does not know about the approval, this is the copy of the approval from the president. It is the same minister that we have invited now to tell the committee about the approval and if the committee should remove that money, nobody should fault the appropriation committee. They have the right. We have invited him to come here.

In her defence however, Minister Ahmed said wrong coding was responsible for the mess.

She said: “The sum of N206,242,395,000 was provided in the budget of the humanitarian affairs, disaster management and social development to provide for the social safety need project. This is an 800 million dollars project that has been approved by the board of the world bank and approved by federal executive council. This loan was fully negotiated by the government of Nigeria with the full involvement of the ministry of humanitarian affairs.

“This project was correctly described in the submission from IERD for the 2023 budget, but regrettably, a wrong code was inadvertently used in the process of inputting it, which resulted in it being captured as Purchase of Security Equipment in the GIFMIS Budget Preparation System (BPS), which has a limited dropdown range of project descriptions/codes.

“The current issues would have been easily clarified between the respective MDAs and the FMFBNP had the affected agencies followed the established budget processes.

“The proposed 2023 budget for each ministry was circulated for review and feedback, then presented at the Federal Executive Council (FEC) before it was submitted to NASS by President Muhammadu Buhari.

“Finally, let me state clearly that the allegation that the FMNBNP “padded” the budgets of the affected MDAs by inserting the projects in question makes absolutely no sense. If the projects are in the budgets of these MDAs, the FMBNP cannot procure them, as their procurement can only be handled by the concerned MDAs. Specifically, for multilateral/bilateral funded projects, the PIUs are domiciled in the designated implementing MDAs, and the lenders will not deal with any other agency, including FMBNP, on their procurements”.

Ahmed also said that the same situation occurred in the ministries of defence and power respectively, ruling out wrongful insertions.

Yet another denial at the Senate by Farouq

Surprisingly, Ahmed’s clarification with the Reps’ committee did not suffice as the answer to the issues. On Thursday, December 1, 2022, the Senate Committee on Special Duties again quizzed Farouq over the funds.

The minister for the second time denied knowledge of the money, directing attention to Ahmed.

She said: “On the N206bn, when we saw it, we didn’t understand what it was meant for because the explanation wasn’t clear.

“If you put N206bn in Humanitarian Affairs Ministry’s Budget and the narration is purchase of military equipment, definitely something is wrong. That is why I said I’m not going to say anything about it until we get clarification from the Ministry of Finance.

“If we had requested for N206bn for a different project and then in the appropriation bill, it is reading something else, we will not own it.”

When the minister was asked further whether she requested N206bn for another project, she came with another narration, saying, “It is not exactly that way, and that’s why we need that clarity from Finance ministry”.

A member of the Committee, Senator Elisha Abbo was not satisfied with the answer and so, he asked the Minister to explain the N206bn in her Ministry’s budget.

The Minister who expressed surprise had said, “Yes we made mention of the projects for 2022 which was not released and part of it was part for the NEDC. The money was not released and now we have seen it recurring by almost 10 folds and we are also going to clarify from the ministry of finance to know why this increase despite the fact that the previous year, the money was not even released for the project. So we will get the details then send to you on that.

“This is all I can say for this. I cannot really give full details of how this amount is going to be utilized because it is something that was negotiated between the ministry of finance and world bank.”

Feeling angry and pushed, the Chairman of the Committee moved a motion to summon Ahmed for further explanation.

“I want to move a motion that the minster of finance should appear before this committee to furnish this committee with details of what they intend to do with N206 billion in 2023 budget. Now that the Minister has said that she is not in charge of negotiation, of course she is not, the Minister of Finance is responsible”.

Last line and the Questions

For emphasis sake, there is an imbroglio here. Whichever way the issue is viewed, there are more questions to answer over the N206 billion insertion or is it “padding” for some quarters. If Nigerians should admit the wrong coding defence in 2023, would they still say that was the case in the 2022 budget? Recall that Farouq said there was no monetary release for the same project in 2022 yet the project resurfaced this year with 10 times hyperinflated amount? Ok! Was wrong coding also responsible for the insertions in the budgets of the NUC, Ministries of Power and Defence? How long has this wrong coding been going undetected in the budget systems? Why would ministers not be aware of all the line items in their budget before its presentation to the National Assembly? Why would they be given a different thing from what they had earlier submitted to the Budget Office? Fine! Can Nigerians also say it was a coincidence that Farouq appeared by proxy at the House of Representatives not withstanding her physical appearance at the Senate and Ahmed appeared in person at House and also shunned the Senate? May be, they were just too busy on those hearing days. Just may be! Who knows? Indeed, there is a plethora of questions from the agitated minds of many Nigerians. They are waiting with bated breath for answers. Who will provide the answers? Or have they been provided already? Everyone is waiting and someone must talk.

Advertisement
Related Topics:Farouk Vs Ahmed: The Unending Inglorious Budget Drama
Up Next