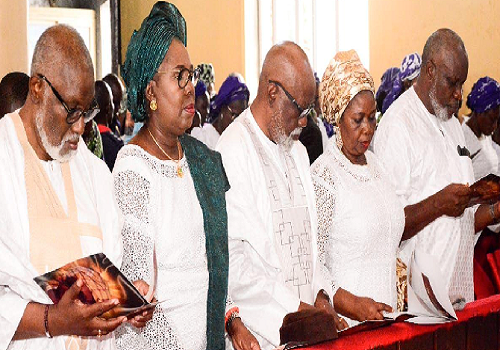 THERE is heavy security in Owo, Owo Local Government Area, Ondo State, ahead of the burial activities of the late Evangelist Grace Akeredolu, mother of Governor Oluwarotimi Akeredolu.

Evangelist Akeredolu died in her sleep on September 15.

She is to be interred in Owo, the hometown of the governor.

Several formations made up of the Department of the State Security (DSS), Nigeria Security and Civil Defence Corps (NSCDC), the Amotekun Corps, the Nigerian Army, and the Nigeria Police Force, were seen patrolling major streets leading in and outside of Owo.

Commander of Ondo Amotekun Corps, Chief Adetunji Adeleye, who spoke in Akure while parading suspects arrested in its ‘Operation Gba’le Gba’ko,’ said the heavy security presence was to ensure visitors coming for the burial are not molested.

Adeleye said security would also be beefed up in other parts of the state to ensure no security gaps were created.

He said the suspects were arrested for crimes ranging from kidnapping, armed robbery, stealing and a syndicate specialised in vandalising power mast.

The Ondo Amotekun boss said some kidnap suspects were arrested with huge sums of money in an area where ransom payment was made.

According to him, “During this yuletide period, there is zero tolerance to criminal activities in Ondo. We have about 300 men on all major roads leading in and out of the state. We have patrol vehicles. This is to ensure people can sleep with their two eyes closed.

“We encourage residents to see something and say something. We assure 24 hours coverage of the expressway and around the town. The army, police, and Amotekun are in constant patrol of roads linking all border towns.

“The function of bringing dignitaries to Owo is being taken care of security-wise by all security agencies in the state. A joint patrol team comprises men of the NSCDC, DSS, Amotekun, army, and the police on the ground. We are to ensure visitors can come in and out without being molested. We will not create any security gaps in the towns.”

Osinbajo, Tinubu, govs, others to grace burial ceremony in Owo

Meanwhile, dignitaries across all walks of life are expected to storm the ancient town of Owo today to join Governor Akeredolu in the celebration of life of his late mother.

Vice President Yemi Osinbajo; Presidential candidate of the All Progressives Congress (APC), Asiwaju Bola Ahmed Tinubu, governors, ministers, members of the National Assembly and leaders of the APC and friends of the governor across political parties as well as members of the inner and outer Bar are all expected to grace the ceremony.

The week long burial event commenced in Owo on Wednesday with the Ajabue traditional procession round the ancient town.

The burial arrangements continued on Thursday with the Service of Songs which was held simultaneously at both Jacob and Grace Chapel of the All Saints’ Church, Ido- Ibadan and St. Matthias Anglican Church, Orogun, Ibadan.

It was followed by another Service of Song at St. Andrew’s Cathedral, Imola Street, Owo. The Christian Wake was held at the Jacob and Grace family residence in Oke-Ogun, Owo.

Advertisement
Related Topics:Heavy security in Owo as Akeredolu buries mum
Up Next