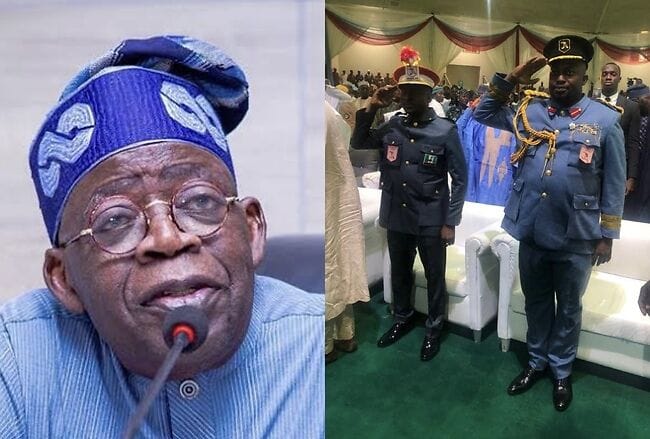 The Atiku/Okowa Presidential Campaign Organization has described the formation of a uniformed squad by the All Progressives Congress (APC) code-named “Jagaban Army” as a treasonable act and an affront to the Nigerian Armed Forces.

TrackNews Media gathered that The PDP PCC has therefore, called for the arrest and questioning of the APC presidential candidate, Bola Tinubu, alleging that the Jagaban Army is being set up to disrupt the 2023 general elections.

This call contained in a statement issued on Monday by spokesperson of the campaign, Kola Ologbondiyan.

While noting that the setting up of the army is to “raid the polling units for votes on behalf of APC Presidential candidate, Senator Bola Ahmed Tinubu,” the statement affirmed that it “is a direct affront to the Nigeria Armed Forces and other security agencies as well as an assault on the sovereignty of our nation.”

The Atiku/Okowa Campaign added: “It is reprehensible that Tinubu can create a rogue force just for the purposes of undermining the electoral and security arrangements of our nation.

“Our Campaign holds that this nefarious act of the APC Tinubu/Shettima Campaign lend credence to the position of the Peoples Democratic Party (PDP) and well-meaning Nigerians that Tinubu as well as his rank and file has set out to make our nation ungovernable and therafter disrupt the 2023 Presidential election scheduled for February 25, 2023 using his army of ‘Jagabandits’.

“The notion of Jagaban Army is a ploy to bring hoodlums, thugs and gangsters together under the cover of the APC and turned them into official militia that will be used to unleash mayhem on the day of election.

“This reckless anti-democratic plot by the ‘Jagabandits’ must also be condemned by all lovers of democracy in Nigeria and across the world over.

“We call on the security agencies to save the lives of Nigerians and protect our electoral process by immediately going after this dangerous formation, arrest those behind this design and save our nation from electoral violence.

“Our campaign counsels Tinubu to note that his Presidential ambition is not a do or die affair and that he should not set the nation ablaze just because Nigerians have rejected him and his party, the APC for their mass failures.

“Nigerians have settled for the PDP Presidential Candidate, Atiku Abubakar, who continues to exhibit maturity, experience and capacity to diligent.