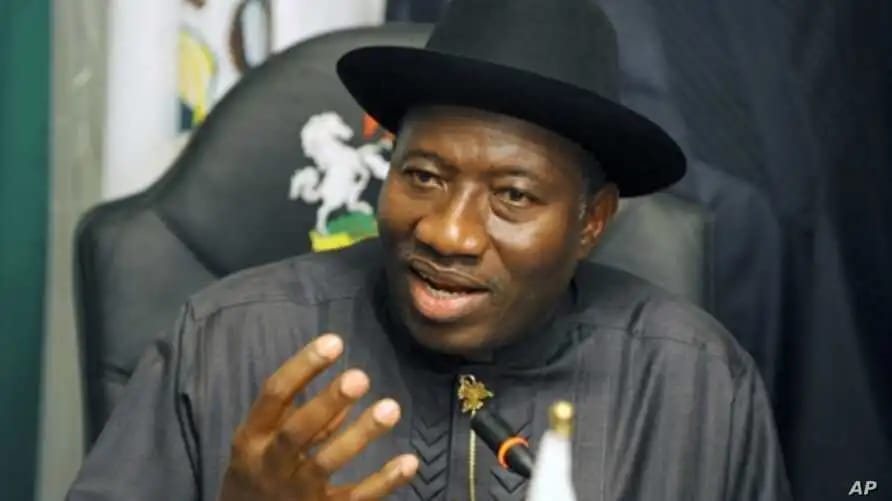 …Warns against politics of bitterness

Former President Dr. GoodLuck Jonathan has described Governor Udom Emmanuel of Akwa Ibom State as an innovative, peace-loving, committed nation builder, and a leader whose significant development has given hope and confidence to Nigeria’s democracy.

TrackNews Media gathered that Jonathan who poured the encomium on governor Udom, yesterday shortly before he commissioned the 1.15km Afi-Uko Nteghe Bridge, on 19km Etebi-Enwang road in Mbo local government area of the State, said more people like Udom were needed in order not to derail Nigeria’s democracy.

He commended the current administration in the State for having delivered several projects that directly impacts the lives of the people, describing the bridge as a flagship project.

His words: ” I am really delighted to be here again to once more bear witness to the considerable development strides being recorded in Akwa Ibom State. Today we are here to commissíon a special project which like governor Udom’s other projects is designed to promote economic growth, and improve the lives of the people.

“Let me commend the governor very sincerely and his team for this visionary leadership.
His strategic development plan has delivered great dividends to the people of this geat State. He is a leader whose significant development has given hope and confidence to our democracy.

“Governor Emmanuel does not build physical bridges alone, he also builds human bridges and social bridges. He is a young, innovative, peace-loving and committed nation builder. The governor has an enviable bridge building disposition, the type that helps cement the fibre of our unity and make our unique diversity more profitable, and desirable.

“People like him are the Stars and heroes of our democracy. In fact I totally agree with the person who tagged him earlier as “Seven Star governor”, because such people work hard to ensure that democracy produce good fruits in the country; what we popularly call dividends of democracy”

The ex-president who was accompanied to the event by his wife, Dame Patience Jonathan, noted that it takes somebody with total commitment to improve the quality of life of his people.

He commended the governor for doing well saying: “The person who is to take over from you has a lot to do, because he has big shoes that he will put his legs on. So I am sure that he will follow your footsteps very, very effectively”

He added that he was however, a bit worried by the negative energy being generated ahead of the 2023 elections across the country, and condemned the act where hoodlums go to pull down Billboards of presidential and governorship candidates.

“We have noticed a level of bitterness in our politics that does not bring development. And I plead with politicians that politics is about marketing your ideas. Politics is not about fighting, insulting, and abusing. I believe that anybody who commits a crime should not be covered under politics.

“Whoever commits a crime, burn Houses, kill people, the records must be kept and whenever the investigation is completed such people must be prosecuted. That is the only way people will stop doing this. But if people commit criminal offenses and walk away, then of course, other people will be encouraged to do same. So security services in Nigeria have a lot to do, they must not spare any criminal”, Jonathan advised.

In his remarks governor Udom Emmanuel who recalled that he the bridge was a fulfilmen of his promise to open up the coastal communities of the state during his second term in office, however, regretted that his people have failed to appreciate his administration’s efforts even when many laudable projects are there for all to see.

He thanked Goodluck Jonathan for honouring his invitation to inaugurate the bridge, saying: “Today I am so happy to have your name written on the concrete of this Bridge as a former president from this South South. Let me also sincerely thank members of this community, and the entire Mbo LGA for the cooperation and support you gave me to ensure the completion of this project.

“A country that produces the quality of gas that we produce here, and does not have an industrial city is not ready for development. But I can say here that with the incoming government of the PDP, this area shall be fulfilled, and these projects shall be realized”

The duo of the project contractor and the Commissioner for Works and Fire Service Prof Eno Ibanga, in their separate remarks while giving brief overview of the project, also
extolled the governor for his visionary leadership.

Speaking, the Contactor, and Managing Director of AMITEC Construction Limited, Aiman Saimua, thanked Udom for the faith he reposed in his company to execute such a gigantic project, noting that he was awarded the project about 4years ago with a marching order to get it done expeditiously.

“However the COVID-19 that shut down the world for almost a year slowed us down. Let me thank His Excellency for the support and the passion to see to its completion. I recall assuring him a few months ago when he came to inspect the Bridge project that we will complete it before the end of 2022. Well ,we are two weeks late but we delivered.

” It is 1,150meters long. This Bridge is 52 spans of 22.5meters each. It sits on 408 piles. It is a clear testament of the governors vision. Let me say this emphatically that I believe governor Udom Emmanuel deserves the title of the best performing governor in Nigeria. He has done so much in infrastructure, while also deploying resources to other critical areas for development and growth of this state”.

Among other dignitaries who spoke glowingly about the governor’s achievement in infrastructural development were former governor of Kogi State, Idris Wada, and the President Nigeria Union of Journalists, NUJ, Comrade Chris Isiguzo.

Similarly political, traditional and religious leaders from Mbo LGA who also spoke at the event including the Catholic Archbishop of Archdiocese of Calabar, Most Rev. Joseph Ekuwem, felt elated over the completion of the Bridge which according to them had subjected the residents to many decades of untold suffering, due to long years of neglect by past governments.

Advertisement
Related Topics:Jonathan describes Udom as a committed nation builderleader
Up Next