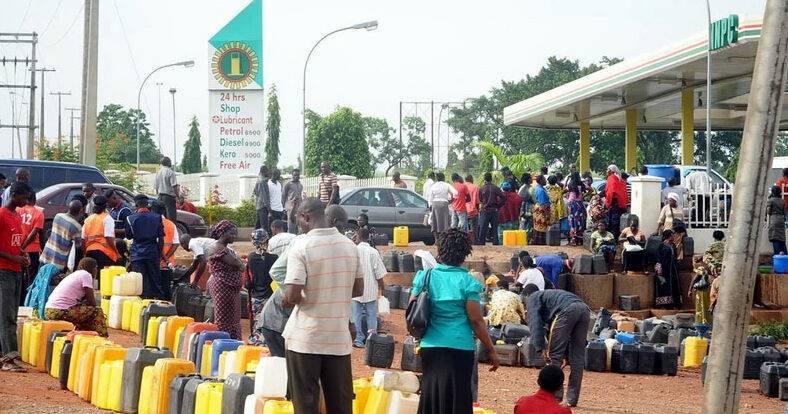 The Organised Private Sector of Nigeria, OPSN, have described the lingering fuel scarcity in Nigeria as a shame, saying a situation where a subsidised product of N165 a liter was being sold at between N300 and N650 per litre across the nation, was unacceptable.

TrackNews Media gathered that Members of these various noted that while they support removal of the fuel subsidy regime in June 2023, as contained in the 2023 Appropriation Act, government should not spare any effort to complete the Turn Around Maintenance, TAM, of the nation’s four refineries before the June, 2023 date.

They equally advised government to institute a judicial enquiry involving employers and workers’ representatives to ascertain those culpable in the fuel subsidy.

The OPS members in a statement issued on their behalf by NECA, said: “The debate over the removal of fuel subsidy has remained over many years with stakeholders having different views.

”However, the stance of the Organized Private Sector in Nigeria, OPSN, has been the gradual removal with clear roadmap and cushioning mechanism for the citizens.

“It should be noted that over a decade, the country has spent well over N20 trillion on fuel subsidies. In 2022 alone, over N5 trillion was expended and over N3trillion budgeted for same in the 2023 budget.

”It thus becomes worrisome that the same product that is being subsidized and supposed to be sold at pump price of about N165 per litre is being sold for over N300 and in some instances N650 per litre across the nation.

“Since 1973 when fuel subsidy mechanism was introduced as a tool to cushion the landing cost of the petroleum products as a result of the Turn Around Maintenance of the refineries, subsidy has taken a frightening turn, becoming a major drain in the purse of the nation.

” It is no gainsaying, that the subsidy regime as currently operated is shrouded in secrecy and fraught with corruption.

“The humongous amount spent in the guise of subsidy regime is literally being used to subsidize inefficiency, corruption and consumption. In other climes, these funds would have been judiciously used for more productive activities that will directly impact the lives of citizens, most especially provision of infrastructural facilities.

“A few years ago, the report of a Presidential Committee on Veri?cation and Reconciliation of Fuel Subsidy Payments between 2009 and 2011, showed that about N667billion (about $4.3billion) was being mismanaged annually, subsidizing millions of litres of petrol that Nigerians never used, or even needed.

”Recent comments by high-ranking government officials including the Comptroller-General of Customs also alluded to the fact that the subsidy scheme is a brazen rape of our scarce resources.

“While the major misalignment within stakeholders is basically on the likely effect of the sudden subsidy removal and attendant price adjustment on household income and general standard of living of Nigerians, the greater argument remains the unsustainability, fiscal loss and the recklessness associated with the subsidy regime.

“This argument is further weakened by the current situation where Nigerians are already paying over N300-N650 per litre for the same product that is supposed to have been subsidized.

“While we strongly recommend that the fuel subsidy regime should be removed by government by June 2023, as contained in the Appropriation Act, 2023, we also strongly urge that government should not spare any effort to complete the Turn Around Maintenance, TAM, of the four refineries before the June, 2023 date.

“We equally urge government to institute a judicial enquiry involving employers and workers representatives to ascertain those that are culpable in the fuel subsidy scam and make necessary adjustment to the Finance Bill 2022, by removing sections that contradicts the Petroleum Industry Act, for the rapid development of the oil and gas industry and jointly develop with stakeholders realistic and applicable cushioning mechanism for citizens beyond providing palliatives, which were in the past, superficial.”