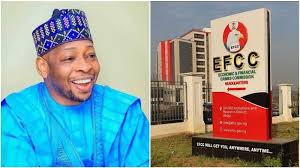 The spokesperson for the AA Zaura Campaign Organisation has called on the Economic and Financial Crimes Commission (EFCC) to quit its media trial of the All Progressives Congress (APC) senatorial candidate for Kano Central.

Speaking at a press conference in Abuja on Tuesday, Ibrahim Garba, said the organisation condemns in its entirety the recent threat to arrest Zaura over an alleged $1.3 million fraud and money laundering charges.

Garba stated that his principal was attracted to President Muhammadu Buhari-led administration due to the willingness to obey the rule of law, and the independence given to the judiciary to perform its constitutional duty as the last hope of the common man.

He added that this is a legacy the AA Zaura campaign organisation believe President Buhari will bequeath to Nigerians upon leaving office in 2023.

However, decrying moves by the anti-graft agency to arrest Zaura, over $1.3 million money laundering allegation, Garba said his principal as a young politician and businessman has impacted the lives of the people positively in Kano State.

“Is it a crime to build people and develop institutions? Why selective probe when a case has been quashed for lacking in evidence?

“Our principal real name is Abdulsalam Abdulkarim Zaura but for brand marketing, he identified with his root at Zaura in Ungogo Local Government Area of Kano State and by extension taking the name to the global space because Zaura is a rich mix of culture and civilization.”

Further noting that Zaura’s media team are running in ensuring that they get a fair hearing and has furnished the principal with details of every court session.

“AA Zaura is first a Nigerian with all rights and privileges and also a man of honour that is testing the political waters. This too will make him stronger and more committed to his passion for mankind.

“We are also advising EFCC to reduce media showcase and focus on its Constitutional mandate as Zaura’s appeal was pending before the Supreme Court in appeal No.Sac/CR/45_/2022The matter is adjourned to 30th January 2023.Ibrahim Garba IcemanPA and Spokesman for AA Zaura campaign organization.”

Ahmed Arogha, the commission’s lawyer, said on Monday that the commission is looking for the billionaire and would be arrested anywhere he is found.

Zaura has been asked to appear before the federal high court in Kano to answer questions on the allegation that he defrauded a Kuwait citizen when he posed as an estate agent in Dubai and other Arab countries.

President Buhari is on his way to Guinea-Bissau