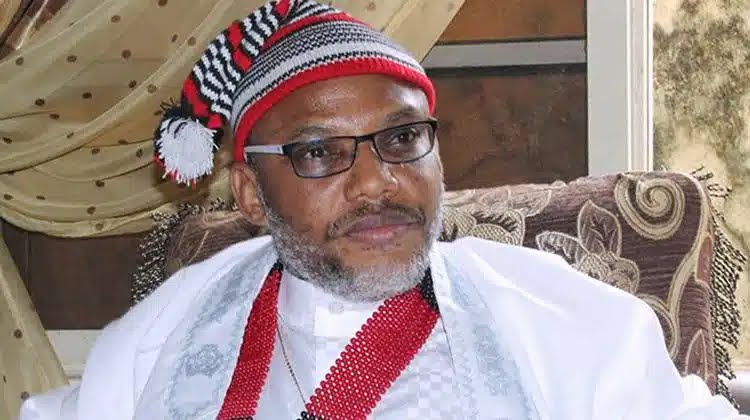 According to Deji Adeyanju, an Abuja-based activist, the release of the leader of the Indigenous People of Biafra (IPOB), Nnamdi Kanu, gives the All Progressives Congress (APC) presidential candidate, Bola Tinubu, a better chance at the polls next year.
According to Track News, Adeyanju told the Daily Post that releasing Kanu would increase the ruling party’s chances of a favorable vote outcome in the Southeast.

According to him, Kanu’s release can help politicians strategize on how to win more votes in the Southeast.

The Abuja-based activist noted that the release of the IPOB leader would boost the morale of APC and PDP supporters alike.

Kanu is still being held in custody by the Federal Government, despite a Court of Appeal decision that cleared him of all terrorism charges.

However, the court later granted the federal government’s request for a stay of the order, with the Attorney General of the Federation (AGF), Abubakar Malami, claiming that his release would jeopardize national security.

Although some agitators are concerned that his release will disrupt peaceful elections in the Southeast next year.

Track News understands that Adeyanju has a different perspective on the matter.

“It will boost APC’s chances, it will boost the morale of their supporters, and that will benefit both the ruling party and the PDP,” he said. The only party affected is the Labour Party, which is expecting a large number of votes from the Southeast.

“If the Federal Government decides to release Nnamdi Kanu, the ruling party’s chances of winning the election will improve.”

“It can be used by politicians in the Southeast as a campaign strategy, so they have something to go home and campaign with.”

“As I previously stated, keeping Kanu adds no value to the Federal Government; what value are they going to derive from keeping a man who has been granted bail and whose arrest is unconstitutional?”

“In the law, you can’t build something on nothing, and you can’t give what you don’t have.” The government cannot prove Kanu’s guilt because they must first return him to Kenya, where he was taken. That is a minor ruling for any court to make because it is extraordinary rendition, which is state capture and abduction of citizens – this is illegal under international law, and the government has no easy way out.

Related Topics:according to Deji AdeyanjuNnamdi Kanu's release has potential to boost Tinubu's chances in the Southeast
Up Next

The Speaker of the Osun Assembly pays Adeleke a visit

JUST IN: Woman Cuts Off 11-Month-Old Son’s Head After Being Ordered By Spirit