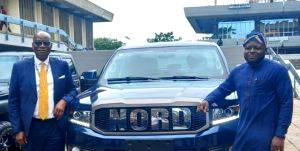 THE Federal Government and the Lagos State Government have praised Nord Automobile, an indigenous firm, and the University of Lagos for establishing an auto assembly plant, which can also produce drones at the university. Senator Olorunnimbe Mamora, Minister of Science, Technology, and Innovation, who represented President Alhaji Mohammadu Buhari at the plant’s opening, expressed delight at the establishment of the assembly, which is the first of its kind in Africa.

During the inauguration of the multipurpose automobile complex, he praised the university-Nord collaboration, calling it “a demonstration of the abundant innovative energy of this country’s youths.” He stated that the project was in line with President Buhari’s recently signed Executive Order 5, “which essentially deals with indigenous components across all sectors of the economy.” That is exactly what we are doing. And this project is a component of that.”

Speaking about drone technology, the minister stated, “This is relevant in many areas, including drug delivery and security.” It can be used to gather information that will be required to move forward.” He promised the ministry’s support to ensure the venture’s sustainability, emphasizing that such a partnership was required for the country’s economic growth.

The in-campus automobile complex provided “a hallmark of hope” for progress, according to Lagos State Governor Babajide Sanwo-Olu, who was represented by Lola Akande, Commissioner for Commerce, Industry, and Cooperatives. “We greatly appreciate the opportunity you have provided for our youths and the general population by establishing this assembly plant here in Lagos,” he said. This is in line with our administration’s goal of creating a favorable business environment for the state’s good people.”

Prof. Oluwatoyin Ogundipe, outgoing Vice-Chancellor of UNILAG, who attended the unveiling with the incoming VC, Prof. Folasade Ogunsola, stated that the university decided to sign a Memorandum of Understanding with the Nord team after learning about the project’s immense benefits to the school. “We entered into an MoU with Nord so that our students can get training through this platform; academic staff can also get exposure through this platform,” he said. This will benefit not only the faculty of engineering, but also the departments of architecture, finance, marketing, and any other department with a stake in this project.”

Ogundipe stated that with the opening of the automobile complex, the university will now begin assembling cars, buses, and other vehicles based on demand. “We will be manufacturing drones in this same location,” he added. They already have a deal in place with the Nigerian Air Force. And I want us to know that our students will learn something new about drones and other things as a result of this arrangement.”

Advertisement
Related Topics:LASGNord-Unilag auto plant gets thumbs up from FG
Up Next