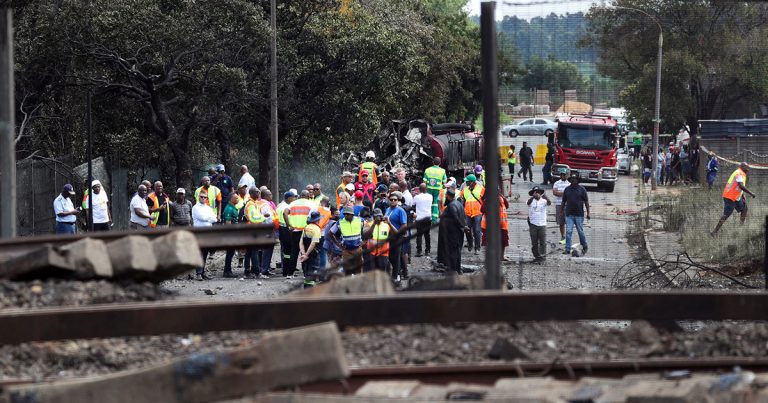 On Christmas Eve, a petrol tanker explosion in Boksburg, South Africa, reportedly killed nine people.
Several residents were injured in the incident, which occurred in Johannesburg’s eastern suburbs, according to Track News.

Emergency personnel rushed to the scene, according to reports, to put out the fire while casualties were evacuated.

When the tanker became stuck under a bridge near a hospital and houses, it was transporting liquefied petroleum gas.

“Firefighters were dispatched to extinguish the flames. Regrettably, the tanker exploded “According to William Ntladi, a spokesman for the region’s emergency services.

According to reports, some Nigerians were attacked by taxi drivers on December 9, 2022, in Benoni, a town in Ekurhuleni municipality, Gauteng province.

The victims were allegedly slaughtered with machetes in front of a police station, causing serious injuries.

Chinwuko was stabbed multiple times during the attack and died on December 21 at Glenwood Hospital.

Some Nigerians who were outraged by the attack gathered outside the Benoni Police Station on Wednesday night to protest the killing.

Later, rubber bullets were used to disperse them. Colonel Noxolo Kweza, a Gauteng police spokesperson, confirmed the incident and stated that the case is being investigated.

“At this time, no one has been arrested, but a docket has been opened pending investigation,” she said.

“We are appealing to anyone who may have information that can help police locate the suspect.”

Related Topics:On Christmas Eve in South Africatanker explosion kills nine people and injures 40 others
Up Next