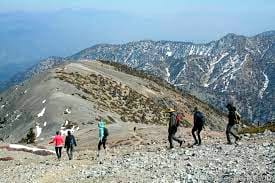 A San Bernardino County sheriff’s helicopter crew rescued a Colorado woman who had fallen 200 feet down a trail in the San Gabriel Mountains early Saturday, according to authorities.

Ruth Woroniecki, 40, was identified by authorities as the woman who had left her campground in Lytle Creek to hike up to Cucamonga Peak.

According to Cpl. Chris Mejia, a spokesperson for the San Bernardino County Sheriff’s Department, Woroniecki slipped on ice and fell 200 feet, coming to rest on a fallen tree.

According to Mejia, a hiker discovered Woroniecki and called for help using a handheld GPS device.

Following the discovery of Woroniecki’s location, a helicopter crew flew nearby and dropped off a rescuer, who then hiked in to help her.

Winds hampered the rescue, but according to Mejia, Woroniecki was found and hoisted to the helicopter before being taken to a nearby hospital.

Woroniecki’s condition was unknown as of Sunday.

Related Topics:San Gabriel Mountainswoman survives a 200-foot fall
Up Next

2023: Some politicians want to win at all costs, using war language – Onaiyekan