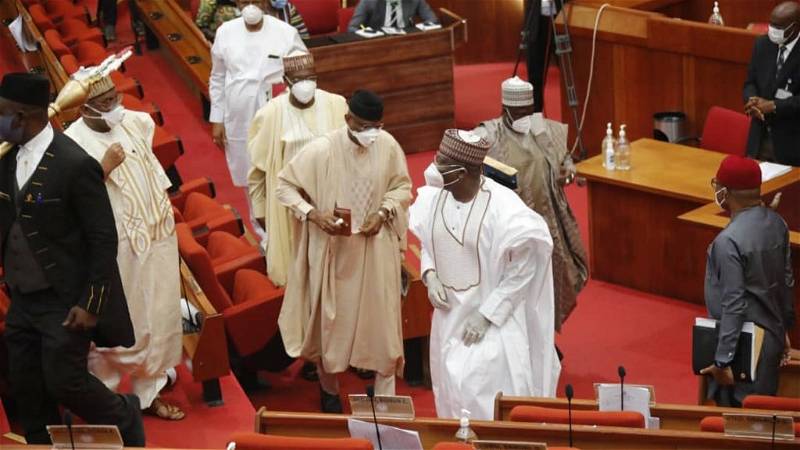 THE Senate for several hours on Wednesday was thrown into disarray and total uproar over how to restructure the payment of N23. 7 trillion “Ways and Means” secured from the Central Bank of Nigeria(CBN) in the last 10 years.

Following the action, the President of the Senate, Senator Ahmad Lawan forced the Senators to go into a closed door session to avoid Fisticuffs.

“Ways and Means” are soft loans or advances by the Central Bank to the Federal Government to enable it cater for short term or emergency finance to fund delayed government expected cash receipt of fiscal deficits.”

Trouble started when the Chairman Senate Committee on Finance, Senator Olamilekan Adeola, APC, Lagos West came up with a report on Ways and Means 2022 as requested by President Muhammadu Buhari last week.

Soon after the presentation by Senator Adeola, Senator Apiafi, PDP, Rivers West raised a point of order, with very strong arguement that President Buhari’s request was unconstitutional and what the Senate is about to do by considering the request is unknown in Nigerian law.

The Senate became tensed up when the President of the Senate ruled her out of order on the grounds that the report should be presented and read by the committee chairman thereafter lawmakers can contribute to the debate.

Lawan’s ruling annoyed Senator Apiafi and some Senators, thereby leading to a tense atmosphere at the hallowed Chamber.

At this point, Senator George Sekibo, PDP, Rivers East raised a point of order calling on the President of the Senate to step down the consideration of the report until lawmakers have more details on what the funds were used for.

The Senate thereafter went into a closed door session .

Recall that President Buhari had last week written to the Senate , requesting the approval of restructuring of N23.7trillion Ways and Means advances given to the federal government by the Central Bank of Nigeria.

The President in a letter read by Senate President Ahmad Lawan during Plenary session last Wednesday, explained that Ways and Means are advances from the Central Bank of Nigeria to the federal government for emergency funding of delayed receipt of fiscal deficit .

President Buhari further stated in the letter that he has approved the securitization of the ways and means balances along the following terms :Amount. N23 .7 trillion , Tenure 40years , Moratorium on principal repayment , three years , Pricing interest rate 9% .

Related Topics:Senate in disarray over CBN loan of N23.7trn to FG
Up Next