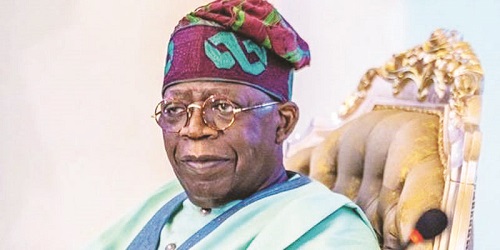 The women, led by vice chairman of APC Presidential Campaign Council, Lady Uju Kennedy Ohanenye, a lawyer, assured they will play a pivotal role in Tinubu’s government when elected in 2023.

Ohanenye, who was the only female APC presidential aspirant, told The Nation that Tinubu would work with the National Assembly to pass legislation promoting female employment in all government offices, ministries and agencies.

She reiterated Tinubu’s commitment to establish programmes and policies promoting more female inclusion in politics, governance and the economy.

According to her: “In his “Renewed Hope” documents which contained his campaign promises that for Nigeria to reach its fullest potential, every person and segment of the population must be given a fair chance

“The growth of our economy and the achievement of our national destiny rests on equity and the safeguarding of fundamental rights and decency in our society which entails ending all forms of invidious bias including, especially, gender discrimination.’’

Ohanenye, who renamed the APC presidential candidate (Chinemeze Tinubu- God makes Kings ), said the APC leader was committed to the development and empowerment of women.

“It is fulfilling that the Vice Presidential Candidate of APC , Senator Kashim Shettima is known to pioneer gender mainstreaming during his tenure as Governor of Borno state where he appointed four female commissioners and birthed several women empowerment Initiatives”.