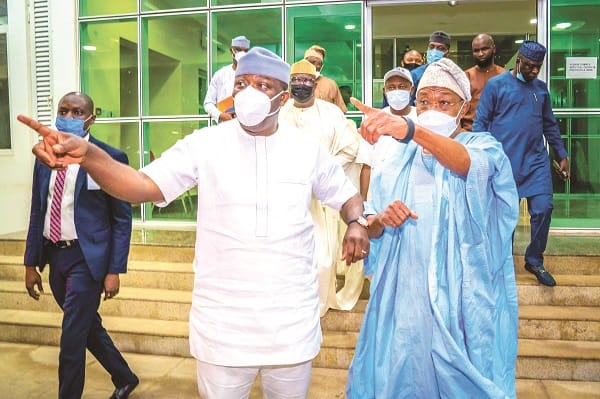 The former governors spoke at an anniversary edition of an online media outlet, NPO Reporters, with the theme: ‘2023 & Beyond: Tracking Campaign Promises for Good Governance, held at the National Merit House, Abuja, yesterday.

The event was also aimed at facilitating responses from political leaders on how to hold politicians accountable over electioneering pledges.

TrackNews Media gathered that these Leader’s where speaking passionately on why Nigeria had had a slow developmental pace over the years; Aregesola, who is Minister of Interior, explained that the country had failed to adequately organize its local government structures across Nigeria.

He also decried the fact that a country of about 200 million people was yet to have a working national revenue base which, according to him, should be got from a good percentage of working-class citizens. He said unemployment had indirectly taken a deep toll on the country, particularly as it regarded national development. He said: “I realised that there is this knowledge gap about governance and I don’t want to sound self-righteous. It is unfortunate that there is this huge confusion and there should not be confusion because there are templates somebody worked on.

‘’They are only two tiers of government in a federation. So, let us all educate ourselves on what a federation is.

“Counties which are the equivalent of our local government, city councils, fund themselves from the income. You cannot contribute much to a government. We all leave one out and that is where the challenge comes from.

‘’I am saying this so you know that what is wrong is not where you’re looking at. No recipient of a handout can be responsible.

“Even per capita of our income from oil, assuming nothing is taken from it, is nothing. We are 200 million people depending on what? If we don’t get half of our population to work, we are going nowhere. It is not a curse. There must be the revenue generated from the people and that revenue is what you can budget upon.”

On his part, former Ekiti State governor, Kayode Fayemi, while explaining reasons most governors and other political leaders continue to fail in implementing their campaign promises after getting into office, said despite challenges, state governors do their best to ensure growth at the state level.

According to him, there are times you genuinely promise you to want to do something as a government, or as a governor, either during your campaign, or even when you get to Office, and then you get there, you are confronted with extenuating circumstances that you cannot even explain, even when you can explain it, time-lapses and you’re not able to do it.

He said: “Those who are from my part of the country will know about the popular Ado-Akure road, which is a dilapidated road, a very bad road and we promised that we were going to treat the road coming to office and when the President also came on the campaign, he also promised that we’re going to fix that road and then we got into office, we started the process.

“We ran ahead of ourselves, we managed to secure some funding from the African Development Bank, with the government of Ondo State to fix the road. And then the federal government said no, you cannot fix our road.

“So we were stuck. In the end, we had to transfer the money, and the funding we got from African Development Bank went back to the federal government who is the sovereign lender. They are lending on our behalf. The African Development Bank will not lend the state money but they will enter the federal government on behalf of the state that has applied.

“So, the Federal Ministry of Works with good intentions, decided that they were going to take the money and they did in principle. By that time, the federal government has awarded the road and then the African Development Bank now said, well, if we’re going to sign off on this, we need to ensure that your procurement process meets global standards, our own standards in the African Development Bank, and then we started another thing for almost a year.

“Meanwhile, we’ve been told by the federal government that we cannot fix the road and toll it. We said okay, if they’re not going to give us money, we said Ondo and Ekiti we will toll the road and there’s an alternative route for those who don’t want to pay, they will go through that alternative road. So, that went back and forth.

In his presentation, former governor of Kwara State, Abdulfatah Ahmed, advised Nigerians not to get blown away by sugar-coated campaign promises but noted that the quality, capacity, mental alertness and suitability of the campaigner should be investigated.

He explained that for campaign promises to be easily implemented, they must conform to the contents of the national budget.

“On that note, we will begin to see whether performance has been done or not and don’t forget, for every elected official, there is a tenure. At the local government level, it is probably three years; at the state and federal levels, it’s four years.

‘’So, we have an opportunity to assess what has been done and what has not been done, vis a vis the budget that has been created, based on campaign promises. So, in a nutshell, campaign promises are measurable. If you take the instrumentalities of the institution that are available to us, we will be able to get it there.

He, therefore, advised Nigerians to vote for credible leaders in the 2023 general elections.

Related Topics:AhmedAregbesoladespite efforts — FayemiWhy Nigeria has continued to fail
Up Next