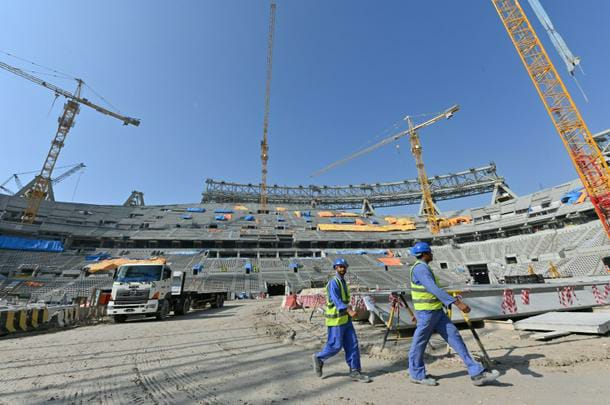 The number of worker deaths associated with Qatar’s massive World Cup campaign may never be known, but experts say the controversy has already harmed the Gulf state’s reputation.

Since FIFA awarded the tournament in 2010, Qatar, one of the world’s wealthiest countries, has been transformed with the construction of a new metro, skyscrapers, highways, new universities, museums, and a port, as well as seven new and one rebuilt stadiums.

Thousands of workers may have died on the massive construction sites, according to human rights organizations and media reports. According to the government, the claims are “outrageous and offensive,” and it is considering “legal” action to defend the country’s name.

Qatar, FIFA, and the international unions that lobbied the Gulf state argue that the reforms it has pursued to improve safety, establish a minimum wage, and give workers more freedom to change jobs and even leave the country should be given more attention.

However, with Qatar determined to modernize, the International Labour Organization, labor unions, and foreign governments are putting pressure on the country to improve data collection in order to resolve the controversy.

In February 2021, the British newspaper The Guardian sparked outrage by reporting that 6,500 workers from India, Bangladesh, Nepal, Pakistan, and Sri Lanka died between 2011 and 2020. This was based on official figures from the respective countries.

Many other news outlets have used this to claim that 6,500 people were killed in World Cup stadiums, causing wild social media conspiracy theories to emerge.

The International Labor Organization, which has a presence in Doha since 2018, branded the figures “misleading” and claimed they were incorrectly linked to World Cup sites without proper context.

The figure, according to the government, is “This is not correct.” takes all foreign worker deaths over the decade and attributes them to the World Cup.”

“This figure (6,500) has become iconic because it answers a question that no one can answer,” said Jean-Baptiste Guegan, a French academic and writer specializing in international sports politics.

“Given the publicity it has received, one might also wonder if it has not been used as part of a foreign influence strategy.”

Other figures have little to say in the debate.

According to Qatar, 37 foreign workers were killed on World Cup sites, with only three of them killed in “work-related accidents.”

‘Stuck in our heads,’

According to an ILO report, 50 foreign workers will die and 500 will be seriously injured in 2020.

The figures may be underreported due to data deficiencies, according to the UN agency.

The 6,500 figure is “extremely problematic,” according to Max Tunon, head of the ILO office in Doha, because “it is a figure that has stuck in people’s minds and people definitely attribute to the construction of World Cup stadiums.”

He went on to say that the figure was influencing Qatari policy, citing a recent EU parliament debate on human rights.

“It was clear that policymakers, including legislators, had strong feelings about Qatar based on what they had read in the media.”

“It wasn’t surprising to hear the 6,500 figure, or the assumption that the country’s two million migrant workers are victims of forced labor.” It was also unsurprising to learn that everything in Qatar was associated with the World Cup, which has had a tangible impact on policymakers.”

The ILO, on the other hand, is putting pressure on Qatar to improve data collection and reform implementation.

According to rights groups and others, many deaths have simply been attributed to “natural causes,” which can conceal far too many workplace accidents.

“Because Qatar fails to adequately investigate the causes of workers’ deaths, it is very difficult to know how many workers have died as a result of working in Qatar’s extreme heat,” said Steve Cockburn, senior researcher for Amnesty International.

“Thousands of deaths on World Cup and non-World Cup projects over the last decade remain unexplained,” Cockburn added. “At least hundreds of these are likely to have been related to unsafe working conditions.”