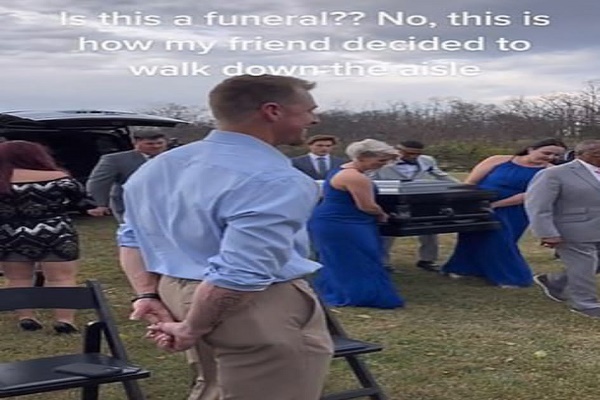 A groom was chastised for his ‘outlandish’ decision to be carried down the aisle in a coffin.

The unnamed groom, who is thought to be from the United States, was carried up the aisle in a black casket at his outdoor ceremony.

A guest captured the bizarre entrance on camera, which showed two bridesmaids leading the terrifying procession and many groomsmen assisting them.

As of the time of this report, the video had 8.2 million views on TikTok.

Although the video did not show the bride’s or groom’s reactions, it clearly struck a chord with online viewers, who chastised the man’s behavior.

‘Does this look like a funeral?’ No, this is how one of my friends chose to walk down the aisle.’

The video did not show the bride or whether the wedding ceremony took place after the groom’s unusual entrance.

Advertisement
Related Topics:Groom arrives wedding in a coffin.
Up Next