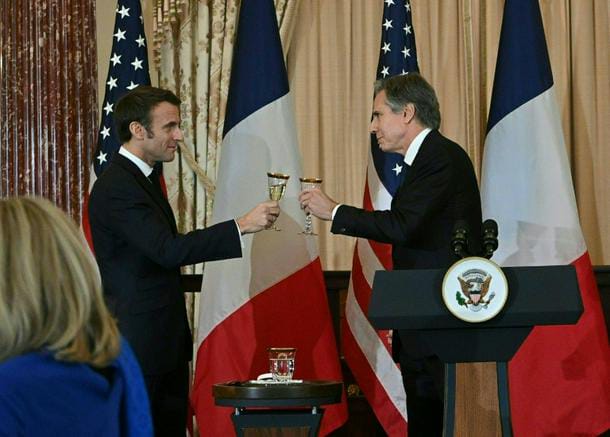 French President Emmanuel Macron was praised for his diplomacy on issues ranging from Lebanon to Ukraine during a state visit to Washington. In addition, Secretary of State Antony Blinken discusses soccer.

At a luncheon honoring Macron on Thursday, the top US diplomat, who spent a portion of his childhood in France, thanked Macron for his favorite team.

Macron was welcomed to the State Department for a luncheon by Blinken and Vice President Kamala Harris. “The years I spent in Paris gave me a lifelong love of soccer – or football, to use the correct term – and the Paris Saint-Germain team,” Blinken said.

“While I couldn’t be more proud to cheer on Team USA at the World Cup, I’m also thrilled to see Kylian Mbappe working his magic for Les Bleus, and thank you, Mr. President, for keeping him in Paris.”

Stu Forster/Getty Images is the photographer.

At the end of last season, Real Madrid wooed the star striker, but he instead agreed to a new contract with PSG. Mbappe has three goals in the World Cup so far, but he was rested for France’s loss to Tunisia on Wednesday.

During a news conference earlier Thursday, President Joe Biden referred to Macron as his “closer,” citing his role in finalizing a maritime agreement mediated by the US between Israel and Lebanon.

Advertisement
Related Topics:The top US diplomat who enjoys soccer expresses gratitude to Macron for Mbappe
Up Next