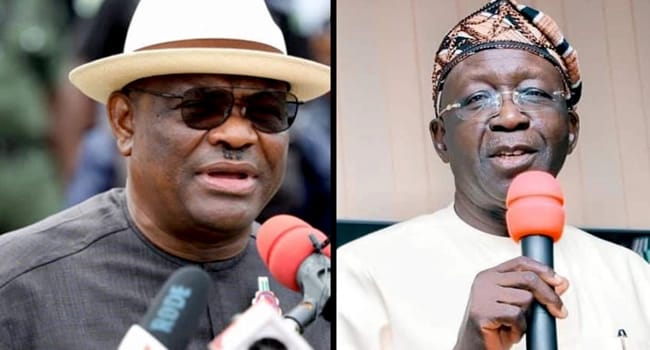 Rivers State Governor Nyesom Wike is concerned about the threat to his life as a result of his call for the resignation of Peoples Democratic Party (PDP) National Chairman Iyorchia Ayu.
On Tuesday, Governor Wike claimed he was threatened for insisting on Ayu’s resignation before the 2023 general elections.

Rivers State Governor made this statement during the commissioning of the Akpabu-Itu-Umudiogha road in the state’s Emohua Local Government Area.

Wike stated that he is not calling for the resignation of the party’s presidential candidate, Atiku Abubakar.

He went on to say that they are only requesting that the party’s National Chairman be produced by their people because Atiku is from the north.

When Wike made his demands, he claimed that they threatened to kill him.

“When I see some people running around and talking nonsense, they easily forget history,” the irritated Governor said. We are not currently advocating that the presidential candidate renounce his ticket. We are not being selfish.

“We’re simply requesting that, now that you’re the presidential candidate, our people take over as chairman, and they’re threatening to kill me.” “Is that even possible?”

He claimed that some state “rent-seekers” are circling Atiku in the hope of becoming ministers.

“When you see some rent seekers from here going around saying they will give me minister of finance, governor of Central Bank, you haven’t killed an animal and you’re telling women, don’t eat it,” Wike added. Kill the animal first to find out if the women will eat.

“I don’t want that kind of assurance,” I say. “Give my people this one we’re talking about right now.” Give us the chairman so we can get things started. They approach you and tell you stories.”

Related Topics:2023:They want to kill me for requesting Ayu's resignation - Wike
Up Next

2023: Adebayo, an SDP candidate, meets with CAN leaders in Abuja.