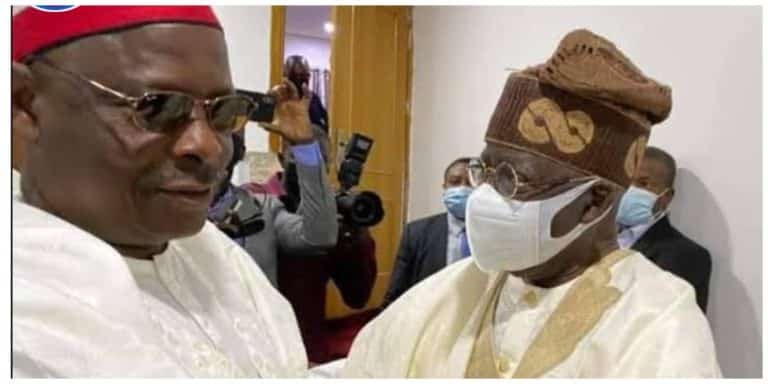 The presidential candidate of the New Nigeria People’s Party (NNPP), Rabiu Musa Kwankwaso, has claimed that the ruling All Progressives Congress (APC) gave the 2023 presidential ticket to the wrong person.
This was submitted by the former Kano State Governor while speaking to a group of supporters in Ebonyi State yesterday.

According to Track News, the presidential candidate was in Abakaliki on Wednesday to inaugurate his presidential campaign office ahead of the upcoming general elections.

Kwankwaso recalled how he helped President Muhammadu Buhari emerge as the APC’s presidential candidate in 2015.

He noted that Buhari won the party’s ticket for a second term at the time and also won the 2019 elections.

Kwankwaso, on the other hand, was concerned that the ruling party had chosen a former governor of Lagos State, Asiwaju Bola Ahmed Tinubu, as its presidential candidate for the 2023 election.

However, the presidential candidate did not elaborate on why he referred to the APC presidential flagbearer as the wrong choice for the ruling party.

Kwankwaso stated that Nigerians had a bad experience under the PDP administration before the APC came to power in 2015, but that the experience had worsened in the APC’s last 7-year reign.

“We were five governors who started APC to produce President Muhammadu Buhari in 2015,” he said. Unfortunately, when we were angry with the PDP, APC worsened. And the APC made a major blunder by electing the wrong candidate to the presidency.

“We are the party to beat in the North.” The APC has failed the country. You might not understand what we’re saying because you have more security and a better economy than we do in the north.”

Kwankwaso stated that he is not desperate to become Nigeria’s next President, but believes he is the best candidate for the job.

According to Track News, he said this in Enugu on Tuesday while commissioning some campaign offices for his party.

He also blamed the All Progressives Congress (APC) and the Peoples Democratic Party (PDP) for Nigeria’s ‘unpalatable’ situation, claiming that voting for him in 2023 will allow Nigerians to change the narrative.

“I am willing to step aside if the NNPP gets a better candidate, but for now, I am the best there is,” Kwankwaso said. “That is why I am working tirelessly to ensure that we win the elections and give Nigerians better representation.”

Advertisement
Related Topics:APC Presidential Ticket Was Given To The Wrong Person - Kwankwaso
Up Next

Wike, Bala Mohammed, Others Are Fighting Jonathan’s Cause; PDP Leaders Will Beg For Pardon – Source