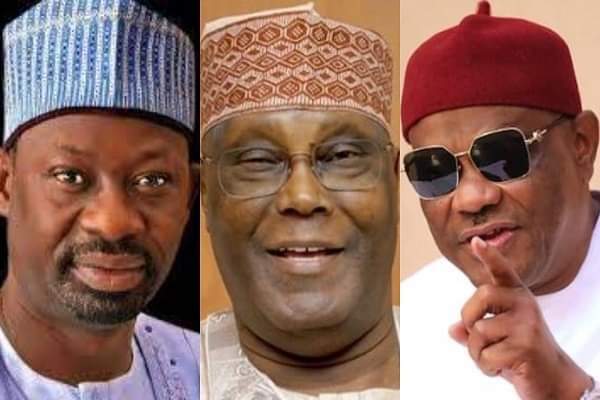 The camp campaigned for the emergence of Wike as flag bearer and has demanded is resignation of the PDP’s National chairman Dr Iyorcha Ayu as a condition to back Atiku.

At the opening of Atiku Presidential campaign office in Gombe, the duo was conspicuously absent, saying they were not invited

However, at the campaign, Dankwambo donated 20 buses for the actualisation of Atiku’s aspiration in 2023. He said: “The whole party has welcomed Atiku, which shows they are with him.”

The Director General of the PDP Presidential campaign team, Governor Aminu Tambuwal said Atiku and PDP would never deceive Nigerians with their campaign promises if voted into power.

“The party is ready to bring back the booming economy, the peace, security and prosperity the country was known for in the past,” he said.

Ayu commended the people of Gombe State for always supporting and standing by the party, assuring that they would not fail if given the opportunity to rule the country again.

Atiku promised to revitalise Gombe as the centre of the North-East, stressing that it deserved to be more prosperous with special emphasis on empowerment and construction of roads.

He said, “As far as I’m concerned Gombe is homecoming is my own home. Let me reiterate the promises we have made if by the grace of God, by your support, we promise that we will empower Gombe. Gombe naturally is a business centre in the North-East, we promise to empower your business men to expand their businesses so that they can create more jobs for our young men and women.

“We also promise that the Dadinkowa dam which was built by the PDP government to provide electricity and irrigation is reactivated for both to be made available in the North-East. We also promise that if you support us to elect a PDP government we will make sure all the roads linking Gombe with Adamawa, Borno, Yobe, Bauchi are reconstructed for the purposes of enhancing trade and commerce.”

Obi to Nigerians: I’ll Be in Charge of Nigeria, Hold Me Responsible