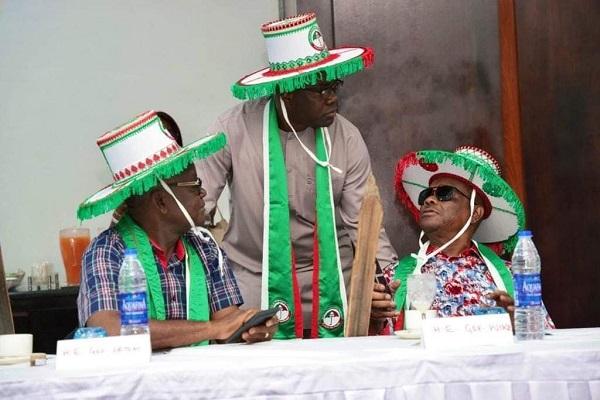 PDP governors and chieftains meet in Lagos to express their displeasure.
Wike, Makinde, Otorm, and Ikpeazu all want Ayu fired.
The five disgruntled Peoples Democratic Party (PDP) governors reiterated yesterday their determination to continue anti-Atiku protests ahead of the general election next year.

They did, however, express their willingness to reconcile with the party leadership if their truce conditions were met.

They were adamant about their demands, which included the resignation of the national chairman, Senator Iyiocha Ayu, and the selection of a new helmsman from the South.

Furthermore, governors affiliated with ‘The Integrity Group’ have stated that they will not participate in the presidential campaign unless their demands are met.

Time is running out, according to a former governor who is a member of the group.

He urged Atiku Abubakar, the presidential candidate, and Ayu to make a decision before it was too late.

The governors and their supporters gathered at the Southern Sun Hotel in Ikoyi, Lagos, to discuss the party’s crisis.

Former Plateau State Governor Jonah Jang, who read the group’s communiqué following its deliberations, stated that the camp was not opposed to any peace initiative.

“After a careful review of developments,” he said, “we have decided to stand firm on the decision we made at our Port-Harcourt meeting.”

“We reiterate that the window of reconciliation in our great party is still open.”

Before the meeting, Oyo State Governor Seyi Makinde told reporters that, while G5 is the face of the struggle, the Integrity Group has the support of many leaders.

Wike and his colleagues then went to George’s office on Lugard Road in Ikoyi, where he addressed supporters.

The Rivers governor advised them to vote for governorship and parliamentary candidates while they awaited the group’s decision on the presidential election.

Related Topics:allies will continue anti-Atiku efforts in 2023G5 governors
Up Next

2023: Tinubu opens up on working with Wike, G5 governors

In Kano, APC supporters march in support of Tinubu