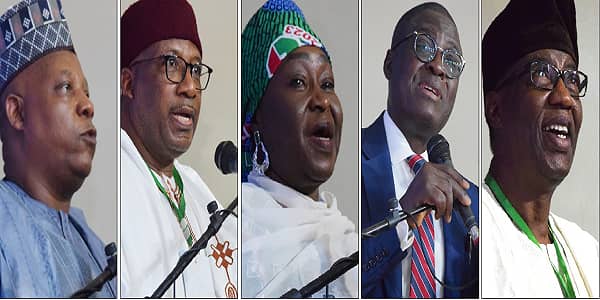 Members of the Tinubu/Shettima Presidential Campaign Council of the All Progressives Congress (APC) revealed the ‘Action Plan’ to reposition the economy yesterday.

The APC campaign train had arrived in Nasarawa State.

Asiwaju Bola Tinubu, presidential candidate, told participants at a Town Hall meeting in Lafia, the state capital, that his campaigns will be issue-based.

In Abuja, campaign committee members spoke about Tinubu’s agenda to reform the economy while building on President Muhammadu Buhari’s foundation.

The symposium was titled ‘Dissecting the Asiwaju Manifesto Renewed Hope 2023.’

Mallam Isa Yuguda, former governor of Bauchi State and Chairman of the APC PF Board of Trustees, stated that the symposium would educate the public and solicit feedback on the manifesto from the electorate.

He stated that the group was dedicated to professional intellectual debate and solution-driven strategies within the political party.

Tinubu’s running mate, Senator Kashim Shettima, stated that if elected, the candidate will keep his promises to Nigeria, while the President’s wife, Mrs Aisha Buhari, stated that Nigeria will be in safe hands.

Shetimma, a banker and former governor of Borno State, stated that Tinubu will prioritize high fiscal performance and restore public trust in governance.

The First Lady, who was represented by the Director General of the National Centre for Women Development, also stated that security will be a priority for the administration.

Otunba Olufemi Pedro, a successful banker and former Deputy Governor of Lagos State, stated that Tinubu would create one million jobs in his first 24 months as president.

“Asiwaju Tinubu will lead Nigeria down the digital path,” he said. He will take advantage of the growing digital economy by intervening in the ICT sector and deploying new technologies to accelerate business growth and diversification.

“The goal for the first 24 months of the new administration is to create one million jobs.” He also intends to provide broadband service to 90% of the population by 2025.”

According to Gbenga Daniel, an engineer and former governor of Ogun State, Tinubu will fight the infrastructure battle.

He stated that when Tinubu became governor of Lagos State in 1999, he had a plan for road construction and effective transportation as chairman of the Infrastructure Sub-Committee of Tinubu’s transition working group.

Under Tinubu’s leadership, he believes Nigeria will overcome many of its challenges.

If elected, the standard bearer, according to legal luminary Babatunde Ogala (SAN), will reform the judiciary and promote the rule of law.

Ogala, whose wife is a judge on the Lagos State High Court, added that judges in Lagos were provided with housing and official cars, and that the incentives could reduce corruption and the temptation to do wrong.

He delivered a speech titled “The Tinubu Panacea for a Safe and Secure Nigeria.”

“The regular budget structure is frequently unable to meet the needs that you might have in an emergency,” he said, adding that “your budget did not foresee that the Trust Fund was a vehicle through which extra-funding can be brought in and allocated directly to agencies at points of need.”

Advertisement
Related Topics:How Tinubu intends to carry out economic and security plans
Up Next

2023 election will be a walkover for Tinubu, says Ribadu