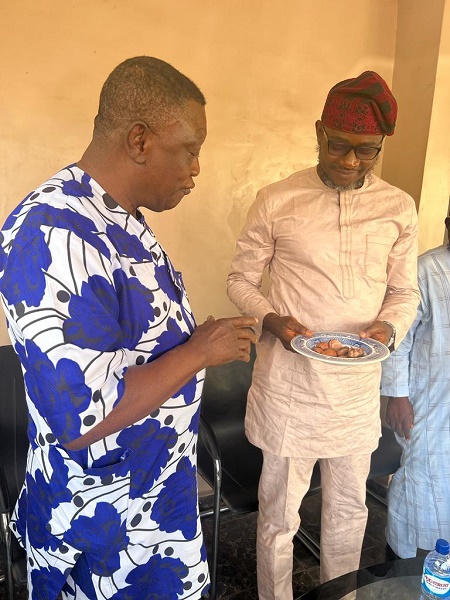 The All Progressives Congress(APC) Benue South senatorial candidate. Comrade Daniel Onjeh has received the endorsement of the “Igede In 2023 Movement”.

The endorsement was the highpoint of an interface between Onjeh and the Movement in Makurdi, Benue State.

The “Igede In 2023 Movement” is a sociopolitical organisation comprising of Igede elites in academia, business, politics and public service worldwide under the leadership of Dr. Jonah Ogbaji.

A statement by Prince Maxwell Ogiri, the Director of Media of the Onjeh Campaign Organisation, indicated Onjeh affirmed that beyond rhetoric and lip service, there was a need for a legal framework for the rotation of power to accommodate the interests of minority ethnic groups and communities in Nigeria.

He added that power rotation and full-fledged local government autonomy will be topmost on the agenda of the 10th National Assembly, assuring his Igede kins that if he gets elected into the Senate, he’ll be an integral part of the critical mass of federal legislators that would pursue this worthy cause.

Onjeh informed his hosts that since the creation of Apa State had become a mirage, it was only through power rotation amongst the three Senatorial Districts of Benue State, that a Benue South citizen may become Governor of the State in the future.

He noted that given the deplorable state of the roads leading in and out of Igede land, which has literally disconnected the people from the rest of the world, if he were a Senatorial Candidate of the PDP that has held power in Benue South since 1999, he would have buried his face in shame before any Igede person, talk more of having the effrontery to campaign for re-election anywhere in Igede land. He opined that that would amount to a brazen affront on the collective sensibilities and intelligence of the Igede people.

While soliciting their support for his senatorial ambition, he pleaded with the group to canvass votes for, and to vote for all APC candidates across the board.

He said it was obvious that religion and ethnicity were the least of the problems of the Benue south people, adding that the major problem of the senatorial district was underdevelopment.

“The Benue South people, though predominantly Christians, are known to be very tolerant of other religions and ethnic groups. We have no history of religious crisis in our place; yet, we have the members of other faiths living amongst us,” noted Onjeh.

Chairman of the Movement, Dr. Jonah Ogbaji, extolled the leadership qualities of Com. Onjeh, and assured him of the support of the Forum and by implication, the Igede people.

Advertisement
Related Topics:I will work for power rotationLG autonomy at 10th NASS – Onjeh
Up Next