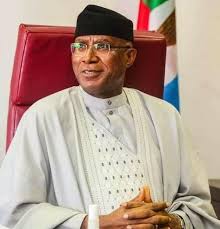 The candidate spoke on the eve of the start of the governorship campaign at Warri Township Stadium.

He claimed to have gained the confidence and trust of the electorate in order to secure a large number of votes for the broom party.

The real estate mogul told his supporters and followers that he agreed with the party’s belief that APC candidates will give Deltans a new lease on life in 2023.

He claimed that the people were tired of deception and desired a new Delta led by progressive minds with the vision to lead “the masses out of the woods of horrible representation brought upon them by the PDP.”

The politician from Emede stated that the PDP and its allies would be humiliated by the people because “enough is enough.”

He claimed that the Isoko people had been subjected to deprivation and ‘criminal deception,’ and that the time had come to “buy back Isoko nation from the world of fiefdom…”

Following allegations by Rivers State Governor, Nyesom Wike, that the state, along with others in the Niger Delta, misused 13% derivation funds, Ononaya decried the wickedness of the Peoples Democratic Party (PDP) administration.

The candidate pressed Okowa to explain why he borrowed so heavily despite having such large derivation funds.

He also stated that the governor should come clean about alleged corruption against him and his family, including his cronies, and that Deltans want to know why “Anioma’s agenda metamorphosed into Owa-Alero agenda.”

Ononaya urged the people to fire the PDP and hold it accountable for stealing their wealth.

According to Onoyona, the APC will reposition the state as a prosperous federating unit, and the Omo-Agege EDGE Agenda will be implemented to improve their lives.

Advertisement
Related Topics:'Isoko will vote in large numbers for TinubuOmo- Agege
Up Next

Top PDP Chieftains, Others Switch to APC in Kwara