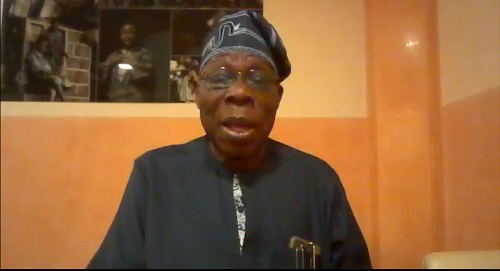 Former President Olusegun Obasanjo has outlined key issues that the next President must swiftly address when inaugurated on May 29,2023.

Obasanjo noted that key issues such as the country’s security challenges including banditry, kidnapping must be tackled.

The Nation reports the country is preparing to elect its next president in February.

Obasanjo, who spoke on Thursday, at a virtual engagement organised by Africa Leadership Group with the theme “Leadership and nation-building”, stated that the country must move beyond think-tank to do-tank

He stated that the country is at a “critical moment” and needs a leader who is critically and clinically sound with the right character, skills, attitude and attributes to turn things around.

Obasanjo said: “I hope the man who will be the next president, will be the type of leader, who will understand the economy, and that’s very important.

“If he understands the economy, there are many he must do including; doing something on fuel subsidy. Also, the country’s debt is not too good, something has to be done.

“People won’t invest in a country that is not secured, where travelling by road or train is unsafe. Unless there’s in investment, there won’t be growth in economy.”

Obasanjo noted that country needs to educate its citizens on political education.

“Many Nigerians lack political education. It doesn’t matter if you’re fully educated or have a university degree. Many Nigerians do not have it. We are easily carried away by ethnicity; religion and many other factors.”

He further urged Nigerians to ensure they exercise their civic rights in the forthcoming elections, noting that votes will count.

Obasanjo said the major problem with Nigeria was the dearth of leaders with the right type of character, who could be trusted with the leadership role in the country.

“We must go beyond talk, and think-tank and move to do-tank. When we see what is bad collectively, let us have conscience and courage to do something, but if you don’t stand up, then you’re an accomplice. The time to embark on leadership and national building is now,” Obasanjo stated.

Advertisement
Related Topics:by ObasanjoKey issues next President must address
Up Next