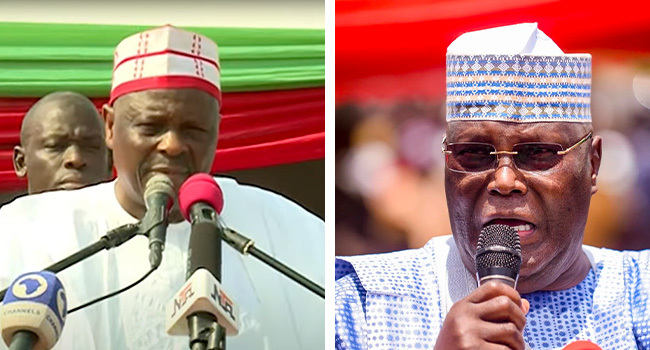 Kwankwaso stated this when he commissioned the Mgbutanwo Internal Roads in Rivers State’s Emohua Local Government Area at the invitation of Governor Nyesom Wike.

The former Kano governor also called out some PDP leaders as rigid and self-centered.

“Many people have made so many mistakes; many people don’t understand,” he said. Some leaders are very rigid, rigid in the sense that whether they succeed or fail, they will stick to one idea, one candidate, regardless of the consequences or the feelings of the people involved.

“We’ve seen people in my former party who are only interested in getting the presidential nomination. They are willing to go to any length to obtain a ticket.

“Any party that is unable to control two of the three states – Kano, Lagos, and Rivers – is out.” He (Wike) has been saying it, but no one has noticed. Anyway, with Kwankwaso out of that party and Wike unsure whether to be there or not, things are moving. Certainly, Lagos is not their own, and one wonders how they will win the 2023 election.”

Kano received over 1.8 million cumulative votes, the most of any state in the 2019 presidential election, while Lagos received over one million total votes and Rivers received approximately 600,000 total votes, all of which were primarily shared between the APC’s Muhammadu Buhari and the PDP’s Atiku Abubakar. Other states with high voter turnout in previous elections include Kaduna, Katsina, Jigawa, Plateau, and Bauchi, among others.

‘I Predicted the PDP Crisis’
Wike and four other PDP governors, known as the G5, have been fighting what they call northern dominance within the party for months. The G5, also known as the Integrity Group, has demanded that Iyorchia Ayu resign as PDP national chairman as a condition for supporting the party’s presidential candidate, Atiku Abubakar.

Kwankwaso told Rivers Governor on Monday that he saw what Wike now sees in the PDP very early, which led to his defection to the All Progressives Congress (APC) in December 2013 and later to the NNPP in March 2022. Kwankwaso also stated that he left the APC in 2018 and rejoined the PDP because the ruling party proved to be worse than the PDP.

“Unfortunately, some of us see what you did not see in time, your excellency.” That is why, in 2013-14, we decided to make some changes in the political architecture of this country, and why we formed the APC, believing that the party would be a progressive party that would address the issues that we were concerned about at the time.

“Unfortunately, this party has proven to many people, particularly within the PDP, that it is worse than the PDP itself,” he said.

The former minister thanked Wike for standing firm and telling the truth, claiming that he is a member of his Kwankwasiyya socio-political movement.

“I’d like to thank you for standing firm. I appreciate you always telling the truth, regardless of what others think or do.

“Your Excellency, I can tell you without putting on a red cap that you are a member of the Kwankwasiyya any day, any time because in Kwankwasiyya you don’t have to put on red caps; many people in this country put on their red caps in their hearts.” It’s there, and I think you’re one of us.”

‘The Integrity Group Will Be Judged by Posterity’
Kwankwaso also stated that Wike’s Integrity Group is doing the right thing by consulting and weighing its options, noting that posterity will judge the group if necessary actions are not taken.

“At this point, I’d like to congratulate Governor Wike on his leadership of the Integrity Group.”

“I believe they are good people, and I know that by the grace of God, the Integrity Group will do the right thing as soon as possible because I believe they are people of integrity, and of course, the action they take will judge them,” he said.

While Wike and his allies have not been seen campaigning for Atiku, it is unclear whether they will back Kwankwaso, Peter Obi of the Labour Party, or APC’s Bola Tinubu in the race for Aso Rock’s top job, which analysts and keen observers have described as a three-horse race.

Peter Obi speaks on consulting with Soludo on Nigeria’s challenges