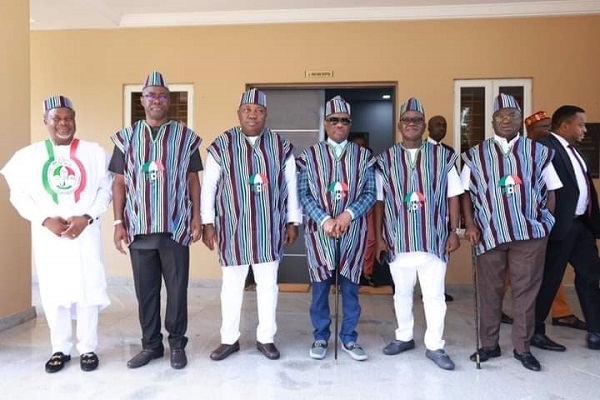 Rivers Governor Nyesom Wike has boasted that nobody can break the ranks of the five Governors (G5) of the Peoples Democratic Party (PDP) calling on National Chairman Dr. Iyorchia Ayu to resign.

Wike said because the G5 had remained dogged by their demand, people had made many efforts to break their ranks but could not succeed.

A statement on Monday by Wike’s Special Assistant on Media, Kelvin Ebiri, said Wike spoke at the new Banquet Hall of Benue State Government House, Makurdi, during a dinner on Sunday organised in honour of the G5 by Governor Samuel Ortom.

“That is why when you see all of us, we are impenetrable. Nobody can divide us. They have tried everything in this world to divide us, but no way.

“The way we operate; I will talk, we have people who don’t talk. You may be underrating them. By the time they will shock you, you will think it is Wike, it is not Wike you are seeing.”

Wike said Nigerians were expecting the PDP to rescue the country, but that it appeared the leadership of the party was not showing serious commitment to that course.

He stated that inclusivity remained a precursor for peace and unity because it would allow everybody to have equal sense of stake both in the party and to work together for the desired electoral victory.

He said: “Agreement is agreement. Respect agreement, so that there will be peace, there will be unity. What we are asking for is inclusivity; include everybody.

“But that one that will go to the other people, give them so that everybody will move forward. That is what we are saying, nothing more.”

On the 25 buses donated to Benue State PDP for their campaigns, Wike explained that the buses were part of the bulk of vehicles his team acquired for his presidential campaigns if he had won the primary.

He said since the ambition did not materialise, the team decided that the vehicles should be shared among those who supported the course.

The buses, he noted, would help in easing their efforts as they re-enact the winning position of the party.

“So, Ortom saying I gave you people vehicles, it is not correct. They are the vehicles that our team bought that time because of the (presidential primary) election, we would have won it, but to God be the glory”, he said.

Wike said they were in Benue State to show solidarity with Governor Ortom whom he described as a good man.

The Rivers State governor thanked the government and people Benue for bestowing on them the honourary citizen status of the State.

Wike said the G5 comprised persons, who had shown leadership in their various states, and on issues of national concern, taken the risk to speak the truth, and maintain integrity with consistency.