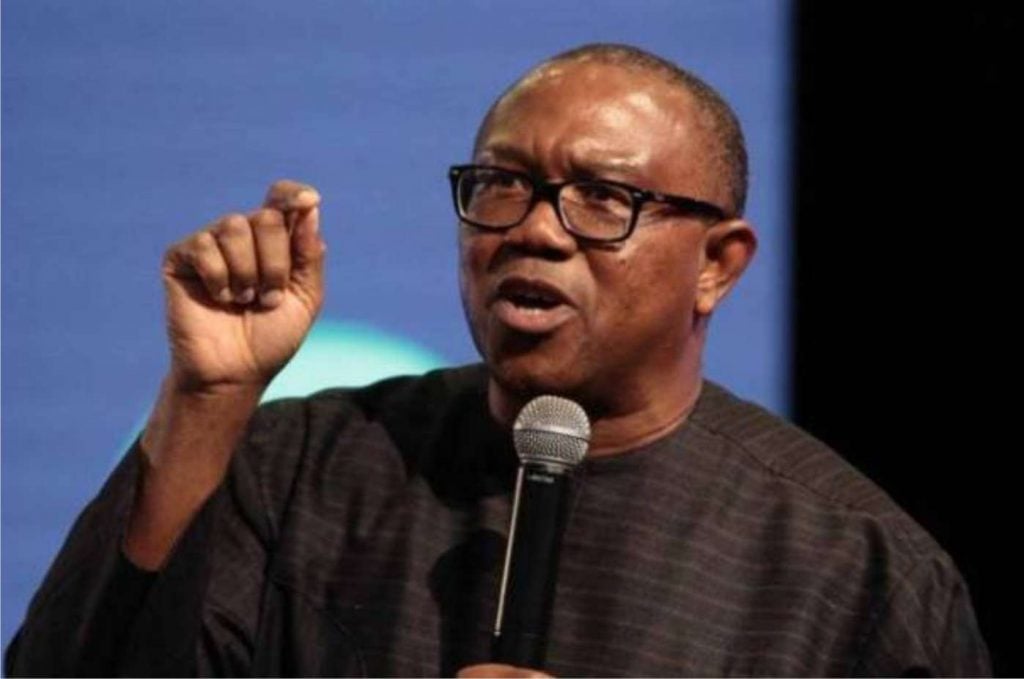 Presidential candidate of Labour Party (LP), Mr. Peter Obi, yesterday, told Nigerians that he would be the one actively in charge of the affairs of the nation, if elected president, and should, thus, be held responsible for whatever happened on his watch.

Obi made the assertion in Lagos when he appeared as guest of the Nigerian Guild of Editors (NGE) forum.

The LP candidate promised never to give excuses as president but always provide solutions, and reiterated his commitment to the country’s transformation. He vowed never to fail the nation, declaring that the era of borrowing for consumption would be over under him, and blaming the current poverty level on unproductive economy.

Obi outlined his programme for the country, stating that the race for the presidency should be based on competence, character, age, and physical and mental vastness of candidates, as against religion, ethnicity, and blackmail.

He hinged his quest for the country’s highest political office on the need to drive policies towards a productive economy, saying he does not need a manifesto to bring about the needed change.

The LP candidate said as a trader, who had traversed the county, he understood the need to make all the regions of the country productive by utilising all available natural resources located in each state.

Responding to questions on ethnicity and religion that seemed to be the concern of many Nigerians, he explained, “It is the confusion the elite put in us to tell us, come this and that. No, I am a Nigerian; I contest election in Nigeria and 18 other people are contesting the election.

“The question is to verify and scrutinise the 18 of us. Some will be better in terms of the Queen’s English and some will have better certificates, but, remember, certificates are not a measure of character and integrity and we are looking for people, who will not steal our money.

“So, we need to find out, go and scrutinise all of us and say, we can trust this one based on… If they say it is his children, what do they do for a living? These are things we need to verify and you don’t just stay without finding out details about them.

“Here you have people, who have no reference point, they have never worked anywhere, never championed anything and a man that has never created wealth cannot manage wealth. It’s not just to speak good English and say if you are given a chance.

“And I can assure Nigerians that I am committed to doing the work, even though it will be difficult, but it requires huge mental and physical energy. Let nobody say we are going to manage this person and, so, we go there again and be surrounded by people, who we don’t know who is in charge.”

Obi said he would be a leader who would take responsibility, rather shift blame and make excuses.

“I want to assure Nigerians that this one I can do it; it must be done and I will not be giving excuses. I don’t want to go in and study what to do and I don’t want to go in and start saying the man, who left yesterday, did this or that. You are not hiring a new person to come and start reminding you of your past, because if the past was good, you hired him to start telling you good stories.

“That is what I am promising Nigerians, that if they hire me, I am going to tell a good story; I don’t want to start reminding them about the past that this man left or this man took this. The job of a leader is not excuses or complaining, the job of a leader is finding solutions and dealing with issues. Let us do the right thing.”

On the cost of governance, the former Anambra State governor said, just like he reduced government aides, when he was governor, he remained committed to implementing a strategy of lean government.

He said, “When people are talking about what they will do, for example, they will say I am going to fight corruption, let people know where they are coming from, how will he fight corruption and if everything is left intact, where he take off.

“Our civil servants are not bad, as they paint them.

“The only thing I can tell you is that the people do not do what is expected here, they do what is inspected. So, if I give you a job to do and follow it up…

“You see, governors and local government chairmen leave their place of work for weeks. I am the first governor to travel to all places in Anambra.

“I want every morning when I wake up, a child says to me, this, that is my work as a governor. It is the job of the president to stop all wastages, because the cost of governance is not acceptable anymore. So leadership changes everything and the driver of the vehicle must be trained, competent and not in a situation, where those who do not go to school suddenly become teachers.”

Asked if he had a clear path to victory and whether his followers would accept defeat in the event of a loss, he said he did not know most of those obedient to his quest.

According to him, “If I can predict the future, I will be the highest paid in the world and I don’t even know, who will be there in February and the only person who can answer the question is God. As a trader, I cannot predict tomorrow; I have my limitations and my limitation is that I leave those who have the ability to predict tomorrow to do that. All I know is that there is a clear pathway for everybody to help me. A country is owned by people.

“Let me tell you, I don’t know them all, I am being honest with you. All these people you see that call themselves ‘Obedients’, you know how politics is and if I am to be able to do what people are doing, I can’t have them. The only thing I owe them is that I say to them, I will not fail them and I will rather die than fail them.

“I will tour around the country and I am determined to do it, if I have the opportunity, I will faithfully serve you. How they will react if I win or lose, my brother, I don’t know. A similar thing has happened to me in Anambra State, if you don’t know.”

On those funding his presidential campaign and the allegation that he offered Rabiu Kwankwaso money to become his running mate, Obi said, “I have never knowingly or unknowingly offered anybody one naira and I will not do so in other to become the president. I am not saying I’m not going to spend money for a campaign, buy lunch for people and everything.

“But I have never in all my talks with Kwankwaso offered him anything.

“On people who are funding me, I am happy to set up a team to oversee all donations, and support to our campaign that is headed by a number of people and that is what brought Aisha Yesufu to what we are doing. So that it can be managed independent of me, because I cannot be talking of being transparent about managing public money without starting with my campaign.

“So as of today, nobody will say he is the one funding Peter Obi. I am funding myself, because of this belief. At some point, people said they have given me billions. I have not seen it, but if it comes, I will take it and we will manage it very efficiently and we are not going to give it to anybody to step down for me or to work with. I know those who work with me.”

Obi spoke on the urgent need to make states depend less on Abuja, saying this can only be driven by a man, who understood production and is economically sound enough to drive the production process.

“Let me say this, we are going back to production,” Obi declared.

He added, “Today, we are going through a series of problems, but I can tell you our experience is a cumulative effect of leadership failure and the foundation of that failure is that you are not a productive country. If you are productive, three-quarters of your problem can be solved.”

On the number of people living in poverty, as recently released by the National Bureau of Statistics (NBS), Obi said it called for great concern, when people did not know where the next meal would come from.

“The level of criminality and banditry – or you give any reason – the foundation is because we are not a productive country. The only thing we do here is about sharing and if you remove the sharing formula with the production form, if they give us the opportunity, the era of borrowing for consumption is over.

“We must begin to feed ourselves and drive the GDP of our country by ensuring every state engages in agricultural activities that would boost production. A lot of states are sitting on beautiful fertile lands, which we can turn around.”

When asked to explain if he was not afraid of becoming the next president considering the country’s huge debt, he said it was not wrong to borrow, adding it only depends on the rationale for borrowing.

He stated, “I have studied and compared Nigeria with so many nations, and there is nothing wrong in borrowing. Every nation that I have studied in the world borrows. But the problem is what you use the borrowing to do. If you borrow for consumption, that is where you have the problem.

“The reason why Nigeria’s debt looks very high, and it looks difficult even to service it, is because the money we borrowed has been thrown away. If that money was invested, it would have been a different thing and I can show you a Third World country that is borrowing like we are borrowing and I will compare it before I tell you what I will do.”

Discussing his plans for the youth, technology, women, and power generation, Obi expressed optimism that with the right political will, a visionary leader with the right framework could meet the yearnings of the people.

He said, “Nigeria needs the right institutional framework to start implementing policies, rather than manifestos that most candidates don’t know. That is why I want to take time to thoroughly proofread my manifesto, but we don’t need a manifesto to bring change, as Nigeria has a lot of documents without implementation.”

Advertisement
Related Topics:Hold Me ResponsibleObi to Nigerians: I’ll Be in Charge of Nigeria
Up Next