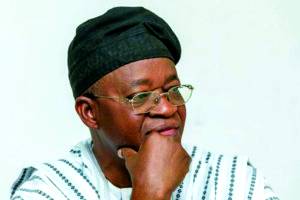 THE Osun State Governorship Election Petition Tribunal has granted a request from Governor Adegboyega Oyetola and the All Progressives Congress, APC, to summon the state Resident Electoral Commissioner of the Independent National Electoral Commission, INEC, to testify before the panel.

Governor Oyetola and the APC challenged the victory of Peoples Democratic Party (PDP) Senator Ademola Adeleke, who was declared the winner of the state’s governorship election on July 16.

At the tribunal’s resumption of hearings yesterday, the petitioners’ counsel, Dr Abiodun Saka Layoonu, SAN, informed the court that the petitioners had filed a Subpoena dated November 3, 2022, compelling the REC to appear before the court. The electoral officer must see Adeleke’s Form CF 001, the nomination form, and all attachments, including the certificates used in the 2018 election.

He stated that he would be forced to request an adjournment until Monday, November 21 because the bailiff had yet to serve REC with the Subpoena, even after it had been signed.

Paul Ananaba, SAN, counsel for INEC, objected to the application for adjournment, citing paragraph 18(11) of the Electoral Act as clear evidence that the petitioners were not prepared to pursue the petition diligently.

While arguing that the REC was never subpoenaed to bring the aforementioned documents, Ananaba added that the petitioners violated paragraph 3 of the tribunal’s pre-hearing report by planning to call REC as a witness without informing the tribunal beforehand.

He emphasized that paragraph 3 required the tribunal to be given a list of witnesses to be called 24 hours before the hearing date.

Oyetola’s counsel, Layoonu, SAN, responded by dismissing the respondents’ arguments as unfounded, claiming that the issue of not being diligent in the prosecution of the petition was simply a blanket statement by them.

Layoonu also referred to paragraph 69(vi) of the petition, which stated explicitly that the documents in question would be relied on, and added that the subpoena could not have been served on the respondents because the tribunal had not issued it.

He then requested that the tribunal reject all of the respondents’ counsel’s arguments.

Advertisement
Related Topics:APC's request to summon the REC granted by the Osun tribunal.Oyetola
Up Next

PDP claims they will win 25 States, including Lagos State in the 2023 general elections

RECONCILIATION IN PDP MUST BE BASED ON EQUITY, FAIRNESS AND JUSTICE-WIKE