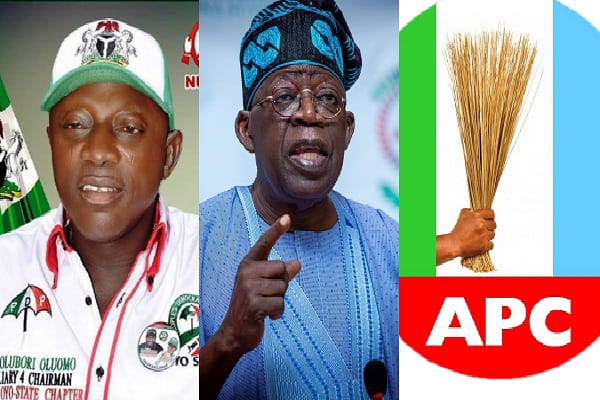 Mr Mukaila Lamidi (aka Auxilliary), the leader of the proscribed National Union of Toad Transport Workers (NURTW) in Oyo State, has been charged with vandalizing campaign billboards of Asiwaju Bola Ahmed Tinubu and other All Progressives Congress (APC) candidates in the state.

Tinubu is the APC’s presidential candidate in the 2023 elections.

According to the charge sheet, Auxilliary was arraigned on a six-count charge of wilful destruction of APC candidate billboards in Ibadan’s Igbo-Ora and Ido areas.

The Commissioner of Police dragged him to court.

Tens of his supporters stormed the Ibadan North East Local Government Magistrate Court premises on Thursday to show their support.

Amotekun personnel were also called in to guard the court and council facilities.

According to the charge sheet, Auxiliary was charged with “Malicious damage and Conduct likely to cause breach of the peace and thus committed an offence contrary to and punishable under Section 517 of the Criminal Code, Cap 38, Vol. II, Laws of Oyo State of Nigeria, 2000.”

On November 13, he was accused of committing the crime.

While Tinubu’s billboard was vandalized, Aderemi Oseni, the party’s candidate for Ido/Ibarapa East Constituency, was valued at N3 million.

Auxilliary was accused of committing the crime with others who were at large “in a manner likely to cause breach of the peace by destroying APC Political Party billboards.”

After pleading ‘Not Guilty’ to the charges, magistrate Taiwo Oladiran granted him N500,000 bail with two sureties in the same amount.

The hearing was postponed until February 2, 2023.

Auxiliary is the chairman of the Park Management System (PMS), a task force established by Governor Makinde to manage NURTW activities in the state after he (Makinde) prohibited the union.

Since 2003, his name has been a recurring decimal in the drivers’ union violent activities, with several people urging the Governor to stop his involvement in park activities because he is suspected of being violent.

During the tenure of former Governor Abiola Ajimobi, he was convicted of murder.

He served his sentence shortly before Ajimobi’s term ended in 2019 and immediately joined Makinde’s supporters.