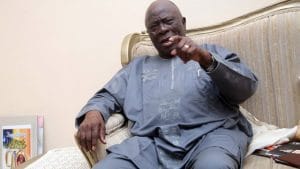 Chief Ayo Adebanjo, the leader of the Yoruba socio-cultural group Afenifere, has stated that the North cannot dictate who becomes Nigeria’s president.

Adebanjo made the announcement in Lagos on Monday.

He also criticized calls for the Southeast to negotiate for Nigeria’s president.

The Afenifere leader stated that the Southeast has the right to produce Nigeria’s president without having to beg any other region.

Adebanjo also dismissed claims that the North has the population to choose Nigeria’s president.

“What right has the North to dictate who will be our president?” Adebanjo asks.

“It was said that the South-East must come to the North to negotiate because politics is a numbers game.”

“My case is – and I told people yesterday – the case for the East is that they do not need to beg for a favor; it is their right.”

“Yet, every time I hear that they should go around because the North has the population, what phony population?” That’s not something you can sell to me.”

Advertisement
Related Topics:Presidency: The North cannot dictate who rules; it is the South-East says Afenifere's Adebanjo.
Up Next