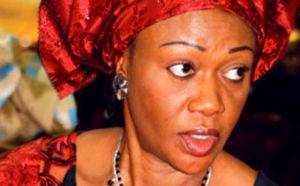 Senator Oluremi Tinubu, wife of All Progressives Congress, APC Presidential candidate, has assured Nigerians that the contentious Muslim/Muslim ticket will set a new tone and narrative in the country’s political future beginning in 2023.

Tinubu said during the APC South-West Women presidential rally on Wednesday at Mobolaji Johnson Arena, formerly Onikan Stadium, in Lagos, that the country would see a Christian/Christian ticket in the future.

Thousands of women flocked to the venue as early as 8 a.m. to show their support for Tinubu-presidency Shettima’s in 2023, as well as other party candidates in the 2023 general election.

Sanwo-Olu made the assurance while meeting with Remi Tinubu and Nana, the wife of APC presidential running mate Kashim Shetima, ahead of the women’s rally in Lagos.

Mrs. Tinubu, speaking on behalf of the Grand Patron of the Tinubu/Shetima Women Presidential Campaign Team, the President’s wife, Aisha Buhari, praised Governor Sanwo-Olu and his team for their tremendous support of Bola Tinubu’s Presidential bid and his developmental strides in the state.

She stated that the delegation was in Marina to inform him of the start of the APC Women Mega Rally, which urged Nigerians to vote for the party’s Presidential candidate.

Wives of Ogun Governors, Bamidele Abiodun, Borno Fanmata Zulum, Kebbi State, Zainab Bagudu, wife of the Speaker of the House of Representatives, Salamatu Gbajabiamila, wives of top Party Representatives, and others were among those in the entourage.

Dr. Ibijoke Sanwo-Olu, wife of the Lagos State Governor, Oluremi Hamzat, wife of the Deputy Governor, and Tayo Ayinde, Chief of Staff, were also present to welcome the delegation.

Tinubu then addressed the large crowd of female supporters, saying, “I bring you warm greetings from the First Lady, Her Excellency Aisha Buhari.” She sends her love to Lagos and wishes you the best, as well as the Governor who is making things work in Lagos State.

“We appreciate your large turnout despite the challenges.” This is yet another homecoming for me. God bless my husband for becoming Governor about 23 years ago, and I supported him as first lady.”

“Social media is good for you to seek proper information,” she said of the influence of social media on youths. Today, I want to tell them that I am proud of my state.

“I’d like to express my gratitude to the people of Lagos Central for electing me to represent them. I am the first woman to be elected to the Senate three times. This is a fantastic opportunity. Since 2007, when my husband left office, I have continued to work for the betterment of our people.

“God rewards good work, and what is happening to us is God’s doing.” He pleases people without their knowledge, but heaven is aware.”

“As for the Muslim/Muslim ticket, this one will set the tone for the future,” he added. We will have a Christian/Christian ticket at some point in the future. What God has done in our land is magnificent.”

Mrs. Sanwo-Olu also stated that Nigeria needs someone with the same political acumen as Tinubu to run the country in 2023.

“We are delighted to welcome you all as we launch the Tinubu/Shettima Women’s Presidential Campaign in the South-West,” she said.

“As we all know, President Muhammadu Buhari, our great leader, has laid the groundwork for progressive governance.” He has been responsive, progressive, and completely dedicated to meeting the needs of the people, particularly women and children.

“As women, there is a strong need for us to use the 2023 elections to vote for APC at all levels in order to consolidate and sustain the current administration’s remarkable work and achievements.” It is obvious that the APC government’s continuation is the only way to ensure greater progress.

“At this point in our democratic experience and history, Nigeria requires Bola Tinubu’s financial expertise, intellectual acumen, progressive capacity, and political savviness to manage the affairs of our great country.”

“Tinubu has a proven track record of excellence.” He possesses an extraordinary ability to identify and galvanize talents in order to catapult our nation to the deserved heights and rightful position in the comity of nations. He has done it in Lagos and will continue to do so throughout Nigeria.

“The Tinubu-Shettima Presidency has pledged to support all Nigerians, regardless of age, color, gender, ethnic, religious, or political affiliations, in achieving their dreams and aspirations.”

“They are personable, dependable, and trustworthy.” The Tinubu-Shettima Presidency will do everything in its power to increase women’s political and decision-making opportunities.

“Indeed, Nigerian women can rely on Tinubu and Shettima’s presidency.” This is a ticket for gender justice, fairness, and equitable participation of women in governance and the political process. It is a ticket that will close gender gaps and address the numerous challenges that women face in public and private.”

Dr. Beta Edu, APC National Women Leader, stated, “Our mission is simple; we want to deliver 40 million votes for Asiwaju.” We intend to win in every ward.”

While urging them to prepare their PVCs, Edu stated that Tinubu would empower women and provide jobs for the youth.

Comfort Olabare, a representative of Youth Ambassadors, stated that the state Governor, Babajide Sanwo-initiative Olu’s on leadership training had had a significant impact on the youth.

She also urged women to vote for Tinubu and the Governor, assuring them that their election would address the country’s unemployment and poverty.

Related Topics:Tinubu believes that a Muslim/Muslim ticket will change Nigeria's political narrative in 2023.
Up Next