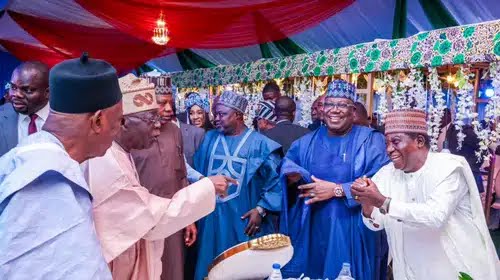 Bola Tinubu, the All Progressives Congress (APC) Presidential candidate, met with his Campaign Council’s Patrons and Advisers.
On Tuesday night, the former Governor and his running mate, Kashim Shettima, met with APC stakeholders at a special dinner held at the Campaign Headquarters in Abuja.

Tinubu described the campaign patrons as “respected politicians who have worked hard for the party and sacrificed so much for the growth of democracy in Nigeria.”

The former Lagos governor expressed delight that the stakeholders were completely behind him and his vision of giving Nigeria “Renewed Hope” and making it better in 2023.

He assured them that if elected, he would do his best to draw on the experience, knowledge, and skills of technocrats from across the country to address the nation’s challenges.

Also speaking, Shettima stated that the widespread acceptance of his joint ticket with Tinubu demonstrates that Nigerians are moving beyond ethnic and religious sentiment politics to consider capacity and excellence.

In his speech, Simon Lalong, Director-General of the APC Presidential Campaign Council and Governor of Plateau State, thanked campaign patrons and advisers for their commitment to the Tinubu-Shettima ticket.

“While promising to do his best to keep all Nigerians on board, the campaign DG stated that the PCC members have extensive experience, connections, and followership to ensure the campaign does not derail.”

“The DG said he was looking forward to having them in Jos for the flag-off of the campaigns that will herald the nationwide movement to engage the people,” his media aide, Makut Macham, said in a statement.