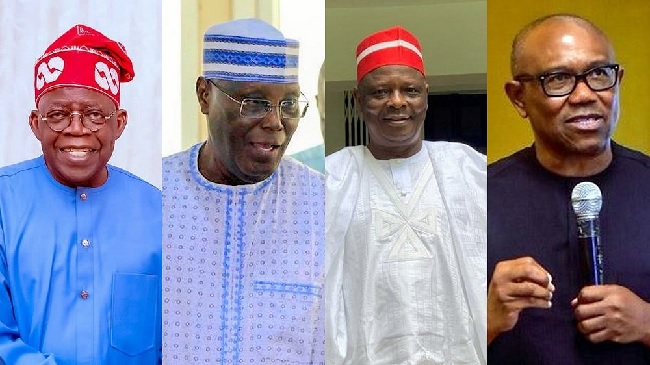 They gave the assurance during the special town hall meeting held at the instance of Arise TV.

While responding to questions on the allegations levelled by President Muhammadu Buhari that State Governors should be blamed for the rising poverty level, Mr Peter Obi of the Labour Party who dismissed the report averred that the buck stops on Federal Government’s table.

The Labour Party presidential candidate who maintained that Federal Government should be held responsible for major fiscal policies responsible for poverty level, he underscored the need to restore investors’ confidence for the adequate inflow of resources required to develop the country’s economy, including education, primary healthcare.

While expressing concern over the country’s inability to achieve the SDGs set objectives, he assured that the Federal and State Governments will synergize through the National Economic Council to drive development, saying: “I’ll be at the centre to work with all the States.”

He also underscored the need to direct fiscal allocation towards agriculture, resuscitate the Bank of Industry (BoI) with a view to support farmers by ensuring access to funding as well as other agencies dealing with crops, among others.

On his part, Alhaji Rabiu Kwankwaso of the New Nigeria Peoples Party (NNPP) blamed the rising poverty on unabated security challenges which deprived millions of Nigerians from going to farms.

To this end, he assured that the NNPP when voted into power in the 2023 general elections will increase the number of Military personnel from 250,000 to 1 million as well as other security agencies with a view to secure every square meter in the country.

He also assured Nigerians of his resolve to tackle the menace of lack of electricity, improve education down to primary education as well as construction of roads and housing, just as he noted that the Party’s policy “is not going to borrow money.”

On the local Government funding, Alhaji Kwakwanso also argued that there’s need to look at the Constitution with a view to make provisions for Local Government authorities to get allocation directly from the Federal Government’s coffers.

While stressing that state governments stifling Local Government is unacceptable, he observed that it is not to only ensure that they get the allocations directly but ensuring that Local Government and States are advised to work together that every single naira given are being utilised effectively, by agreeing on certain infrastructural projects to be executed.

On his part, the PDP Flagbearer, Alhaji Atiku Abubakar of the Peoples Democratic Party who noted that his party has taken note of all the statistics on poverty both internationally and locally, underscored the need “to get our children rightly educated” and get them readily for the private sector which is the driver of the nation’s economy.

In the bid to achieve this, he underscored the need to incentivize the private sector; revolutionalise and ensure massive investment in agriculture which he described as the mainstay of the Nigerian economy.

He also stressed the need to ensure adequate provision of fund to the Small and Medium Enterprises (SMEs) which he described as the second employer of labour in the country, to enable SMEs to provide substantial amount of money for young men and women to access loan to set up businesses.

The former Vice President who argued that the PDP administration introduced the Social Investment Programme (SIP), alleged that President Muhammadu Buhari’s administration which allegedly copied the scheme has not been able to effectively implement the programmes.

While assuring that his administration will sustain the Social Investment Programmes if voted into power, he expressed optimism that effective implementation of these programmes will drastically reduce the poverty level.

He however noted that after nine months of direct payment into Local Government accounts, the state governors were against the move arguing that the decision was contrary to the Constitutional provisions, hence started paying into the joint account.

While noting that various deductions being made by the State Governments was responsible for the depletion of Local Government’s fund, he underscored the need for amendments to the 1999 Constitution in the bid to make them independent and protect their interest. He assured that his administration will reverse the joint account.

2023: Tinubu To Speak At Chatham House In London Today

You’ve no electoral value, even in your LGA, Tinubu fires back at ex-SGF Lawal