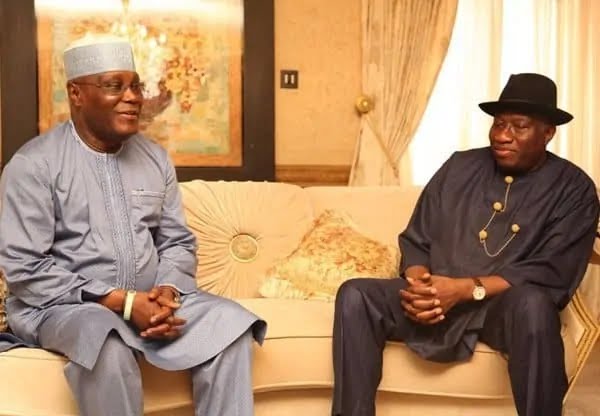 Some PDP leaders intend to contact former President Goodluck Jonathan in order to appeal to the five disgruntled PDP governors known as the G-5.
The leaders believe that the party’s disgruntled governors are fighting for the former president’s cause.

In 2014, the PDP’s presidential candidate, Atiku Abubakar, abandoned Jonathan to work for the All Progressives Congress (APC).

Meanwhile, Rivers State Governor Nyesom Wike and his allies have been at odds with the party’s 2023 presidential candidate, Atiku Abubakar.

Prior to the 2023 elections, the Governors had condemned northern dominance in key positions in the main opposition party.

In their call for justice and equality, the disgruntled Governors demanded that the party’s National Chairman, Iyorchia Ayu, resign and be replaced by a southerner.

The leaders are seeking Jonathan’s intervention in the matter because the aggrieved governors were members of his political family who served as federal ministers under him.

While speaking with Leadership, a member of the Atiku/Okowa Campaign Council revealed that Jonathan is encouraging the governors to fight Atiku because he knows they are fighting his cause.

According to the source, the party is sending delegates to Jonathan to beg him to forgive Atiku.

“There is no way we will continue to go back and forth because of a group of governors who appear to have made up their minds collectively to work against the party’s candidate because of one man whose commitment to the PDP has been questionable for a long time,” the source said.

When asked who that ‘one man’ was, the source stated, “There is no need to hide from the truth any longer; the entire thing we are seeing in the PDP has been manifested by Wike and his group for President Jonathan.”

“We have plenty of evidence that these governors are influenced by Jonathan.” He benefited from this party, and it is unfortunate that he is encouraging Governors Nyesom Wike, Makinde, Ikpeazu, Ugwuanyi, and Ortom to act in this manner. He is well aware that these five governors are opposed to his cause.

“We were convinced when Bauchi governor Bala Mohammed added his own perspective to it.” That was unnecessary, and we all know that whether Jonathan is in power or not, Bala is the closest northern politician to him.

“For example, Wike and his colleagues are (were) in Bauchi today (yesterday). Is it necessary to have a prophet to tell us what they are up to? We know where they’re coming from, but they’re all going to fail.”

According to the source, the five disgruntled Governors cannot hold the PDP hostage ahead of the 2023 general elections.

“There are so many routes to any market,” the source continued, “that if these five governors think they can hold us to ransom, they have failed.” We’ve taken enough precautions to avoid their antics in what appears to be an effective shadowing operation, so they won’t sabotage us.

“The party’s Board of Trustees has already tentatively approved that all concerned chapters be fortified, with a focus on specific personalities with influence in their respective states.” And when the time comes, Nigerians will realize that the G-5, or whatever they are called, is a powerless minority.

Related Topics:Bala MohammedOthers Are Fighting Jonathan's Cause; PDP Leaders Will Beg For Pardon - SourceWike
Up Next

APC Presidential Ticket Was Given To The Wrong Person – Kwankwaso