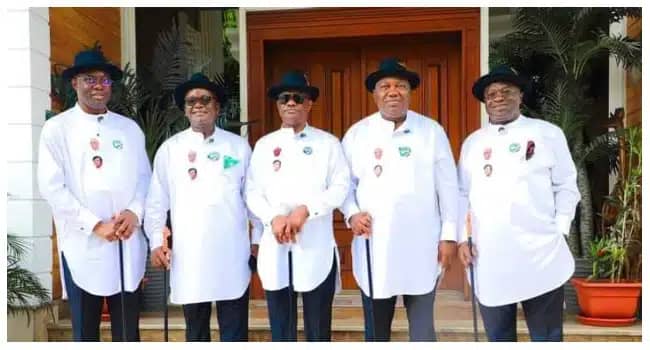 Governor Nyesom Wike of Rivers State and his disgruntled colleagues performed beautiful dance moves ahead of Wednesday’s elections in Abia State.
The Governors, dubbed the G5, showed no signs of concern about the Peoples Democratic Party (PDP) crisis that has engulfed the party ahead of the 2023 general elections, instead taking to the dance floor to cheer and merry.

Other governors in the group include Seyi Makinde of Oyo, Samuel Ortom of Benue, Okezie Ikpeazu of Abia, and Ifeanyi Ugwuanyi of Enugu, in addition to Wike.

The dance was performed at a reception in their honor on Wednesday night in Abia State, according to Wike, who shared the video on his Twitter account.

On Thursday, Wike tweeted, “We (G5 Governors) were treated to a fine reception in Abia State last night in preparation for the PDP Campaign today.”

According to Track News, the five disgruntled governors have vowed not to support the PDP or its presidential candidate, Atiku Abubakar, unless the party’s National Chairman, Iyorchia Ayu, resigns and is replaced by a southerner.

They believe that the north has an excess of party leadership positions, which does not foster a nationalistic mindset.

They were adamant about a cause of justice, fairness, and equity.

Because all reconciliation efforts have failed, the Governors’ stance jeopardizes the PDP’s chances of regaining power in 2023.

Similarly, Ayu has defied Wike’s camp by pledging to serve out his four-year term unless the party requests that he resign.

Advertisement
Related Topics:G5 governors chose to ignore the PDP crisis in order to show off their dancing skills in AbiaWike
Up Next