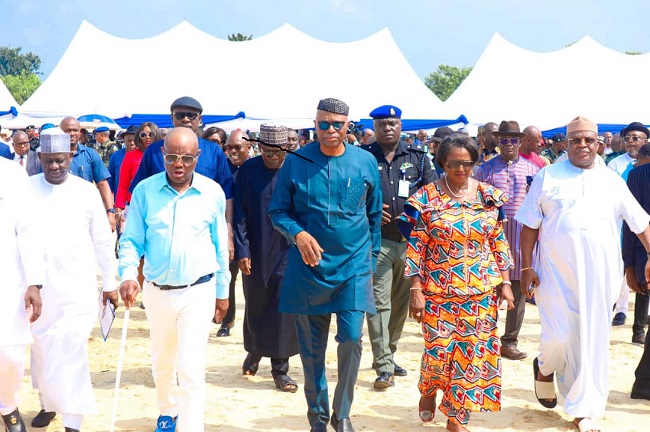 Rivers State Governor Nyesom Wike has warned that dire consequences await any party which dares to disobey the order 21 of his government.

The warning is coming on the heels of the order by the Inspector General of Police, Usman Alkali Baba that State Commissioners of police should disregard orders of state governments seen to restrict the rights of political parties to freely conduct their political activities in the states.

Governor Wike’s Orders 21 and 22 are largely regarded to come under the consideration of the IGP’s order.

But Governor Wike, while breaking the ground for the reconstruction of Indorama-Agbonchia-Ogale-Ebubu-East/West Link Road in Eleme Local Government Area of the State declared that the Executive Order 21 is still in force in the State to protect the public facilities, irrespective of the IGP’s order.

He observed that people had gone to misrepresent the intent of Order 21 before the Inspector General of Police that his administration was preventing other political parties from campaigning in the State.

Governor Wike told political parties wanting to hold their events within government facilities and schools, to apply and meet the terms.

He said those who are threatening to disobey the Executive Order of the government should be prepared to bear the consequences.

Speaking further during the occasion Wike urged Alhaji Atiku Abubakar, the presidential candidate of the Peoples Democratic Party (PDP), to call to order members of the presidential campaign council of the party and stop them from attacking the G5 governors.

He warned that any further attack from the campaign council would attract the wrath of the Integrity Group and together with the G5, they would not hesitate to strike back.

He stated that the G5 governors were lovers of peace and that they believed that all party members should embrace peace so that together, they can work to secure electoral victory for the party in the 2023 election.

Wike declared; “Now, what I want to tell the presidential candidate of PDP is we need peace. We want all of us to be together for the party to win the election. But let me say clearly, if your boys continue to attack the G-5 (governors), continue to attack the leaders of our party, we will strike back. If anybody again dares in the PDP Presidential Campaign Council to insult the PDP governors G-5, insult our leaders of Integrity Group, we’ll fight back. Enough is enough.”

The governor added that it was ludicrous for persons who defected to the All Progressives Congress, APC, and abandoned the PDP at its trying moment, to dictate to him and his associates of what to do in the party.

“We want peace. All we want is equity, fairness and justice. Nobody should take us for granted. I cannot understand people who just left APC two days ago, two weeks ago, and are talking about PDP that we stayed and suffered to build the party. Even if anybody will talk about us not these miscreants”, he started.

Governor Wike described Yakubu Dogara, the former Speaker of the House of Representatives, as a man who can not stand by his word.

The governor remarked that soon, he will reveal the content of the discussion both Dogara and Babachir Lawal, the former Secretary to the Federal Government had with him at his residence when they visited.

He recalled how Dogara had evaded an appointment they were to have and surreptitiously left the PDP to join the APC.

“Dogara was to see me. Unknown to me, he gave me an excuse and I was watching Dogara on TV being received by President Muhammadu Buhari that he has gone to APC.”

The project in focus, he noted, is part of the different and impressive dimensions in which Governor Wike has continued to deliver massive infrastructure to drive development both in the urban, suburban, and rural areas of the State.

Mimiko stated; “There is the poverty reduction content. The development of the human capital dimension is unmistakable. The practical manner in which Governor Wike’s focused leadership has enhanced the value of Rivers people, and earned them respect across the land.

“It is that his integrated infrastructure development is one of the greatest catalysts for equitable, bottom-up economic growth. This is inclusive growth; the type of growth that addresses rural poverty in its practicality; not the type that emanates from tortured statistics and dubious metrics.”

Dr Mimiko emphasized that agitation for responsible management of the country’s diversity, which is at the root of what Governor Wike represents in Nigeria’s politics today, is not a North vs South issue.

He said the clamour for equity in politics brings to the fore the place of identity in a multi-ethnic polity like Nigeria. According to him, to suggest that identity can be discounted in such a context is to be untruthful.

“It is actually a patriotic call for unity based on fairness. Yes, it certainly is not an end in itself, but it is a necessary route to national cohesiveness and inclusivity. It is, indeed, the ultimate destination of responsible leadership and pan-Nigeria responsive followership – inevitable partners, as it were, in the drive towards comprehensive socio-economic development!”

Related Topics:Wike Warns Opposition Against Disobeying Order 21
Up Next