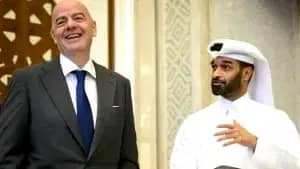 Twenty-four hours after Hassan Al Thawadi cleared the air regarding the number of deaths during the construction of World Cup facilities in an interview with Pierce Morgan, Gianni Infantino, the President of FIFA, praised Qatar, calling the ongoing World Cup “incredible.”

Infantino spoke with Aron Akeredolu of Arise TV on the same day that some soccer fans in Qatar celebrated the birthday of Amaju Pinnick, the former President of the Nigeria Football Federation and a FIFA Council member.

When asked about his impressions of the World Cup so far, Infantino stated, “it’s a great World Cup, it’s peaceful, the public, the fans are crazy about the whole thing, it’s incredible.” After Covid 19 and the global tension, it is a World Cup that is uniting the world. “I’m excited about the sense of unity that football is bringing to the world.”

The FIFA President, who joked that “we miss Nigeria,” praised African teams for their efforts thus far. “Senegal has qualified for the Round of 16, and Cameroon and Ghana still have a chance to advance.”

Amaju Pinnick praised Qatar for hosting a “historic World Cup that may never happen again in our lifetime.”

He went on to explain what he meant. “The world appreciates the quality of everything here – the facilities, the organization.” The venues are all within 50 kilometers of one another, and the longest distance between them is about 30 minutes. Some people watch two matches in one day. It’s a lovely World Cup.”

He expressed regret that Nigeria did not qualify for the World Cup in Qatar and apologized to Nigerian soccer fans.

Some hours earlier, Hassan Al-Thawadi, the head of the Supreme Committee for Delivery and Legacy, which is in charge of organizing the Qatar 2022 World Cup, stated that his submission during an interview with British journalist Pierce Morgan on work-related deaths during the ongoing FIFA World Cup construction has been misconstrued and misrepresented by some western media.

The denial was necessitated by the media’s perception of Al-interview Thawadi’s with Pierce Morgan.

ISIDER published an article titled ‘In denial?’ on November 29, 2022. According to Qatar 2022 CEO Al-Thawadi, the number of construction deaths on all sites is 400-500. Al-Thawad was quoted on the ‘Pierce Morgan Uncensored’ program as saying that “400-500 migrant workers have died as a result of work done on construction projects, and is sticking to the figure of just three work-related deaths on World Cup projects.”

Contrary to the report, the Qatar World Cup chief came out to set the record straight, saying emphatically, “No, I did not say so.”

“Separate quotes regarding figures refer to national statistics covering the period of 2014 – 2020 for all work-related fatalities in Qatar were 414 nationwide, covering all sectors and nationalities,” the statement continued.

Liverpool defender Konate, France has no excuses for their defeat in Tunisia.