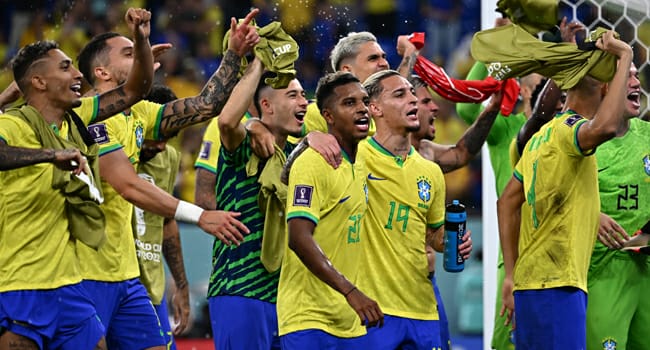 Brazil players celebrate with their fans after winning the Qatar 2022 World Cup Group G football match between Brazil and Switzerland on November 28, 2022 at Stadium 974 in Doha. (AFP photo by Anne-Christine POUJOULAT)

Brazil coach Tite is expected to follow France’s lead and rest key players for their final World Cup group game against Cameroon on Friday, despite the fact that their place in the last 16 in Qatar is already secured.

After beating Serbia and Switzerland to start their campaign, the World Cup favorites face Cameroon at the Lusail Stadium, needing only a draw to secure top spot in Group G.

Even a defeat would not prevent them from topping the section as long as the Swiss failed to win against Serbia at the same time, but France have already demonstrated that changing the majority of your starting lineup does not always work.

The holders made nine changes for their final group game against Tunisia on Wednesday, and they were defeated 1-0.

“I can only evaluate players based on their performance on the field.” “It is a risk, yes, but it is also an opportunity for them to demonstrate their quality,” Tite said when asked about the dangers of making too many changes.

Brazil will still be without Neymar and right-back Danilo, both of whom suffered ankle injuries against Cameroon, as well as left-back Alex Sandro.

The inclusion of Alves, 39, who made his international debut in 2006, in the squad was criticized in some quarters in Brazil.

Alves, who was injured during the 2018 tournament, ended a second stint at Barcelona at the end of last season and is now playing club football in Mexico.

“I’ve been playing for Brazil for many years, and it gives me great satisfaction to be able to close out this cycle by playing in a World Cup,” said Alves, who could be joined in Tite’s starting lineup by Antony and Gabriel Martinelli, both 22.

“I’ve been here for 16 years, and this is the most balanced team we’ve had,” he said.

“Age is irrelevant in football.” The only thing that matters is whether you are the youngest or the oldest.”

Brazil has only lost in the first round of the World Cup once since 1966, and that defeat to Norway in 1998 came after they had already clinched top spot in the group.

If they win their group, they will play the runners-up from Group H on Monday, which includes Portugal, Ghana, Uruguay, and South Korea.

Related Topics:Brazil Will Rest Key Players Against Cameroon Before Knockout Stages Sports
Up Next

Juventus striker, Dusan Vlahovic denies reports that he’s had an affair with his Serbian team-mate’s wife