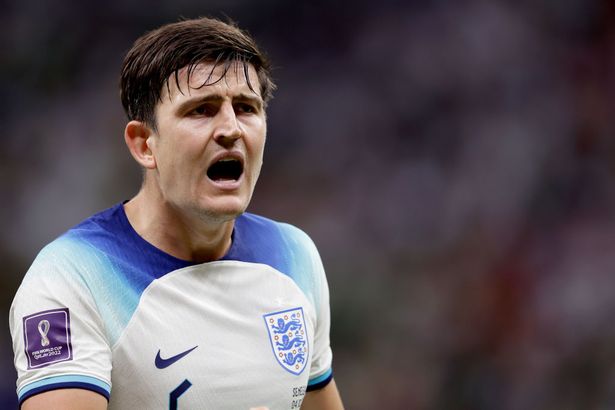 According to daily French newspaper L’Equipe, Harry Maguire’s threat from set-pieces makes him the man France must devise a plan to stop in their World Cup quarter-final against England.

While much of the focus is on teenage midfielder Jude Bellingham, captain Harry Kane, and wingers Phil Foden and Bukayo Saka, L’Equipe believes that out-of-favour Manchester United defender Maguire can cause major problems for France.

Maguire ’embodies’ England’s set-piece threat, and they believe France will need to make ‘adjustments’ to deal with it in Saturday’s eagerly awaited quarter-final.

France conceded from a corner in their group stage win over Denmark, and L’Equipe says that ‘raised everyone’s level of vigilance’ ahead of their next match against England.

Maguire is England’s fourth-highest scorer under Gareth Southgate, trailing only Kane (47), Sterling (18), and Rashford (14), highlighting the threat he poses from set-pieces.

After being pulled down early in the win over Iran, the centre back was unlucky not to win a penalty, and France will be well aware of the dangers of getting too close to him.

Set pieces, according to France’s talisman Kylian Mbappe L’Equipe, can play a significant role in what is expected to be a fiercely competitive quarter-final on Saturday.

They have warned Les Bleus about England’s habit of using basketball-style screening at corners to free up Maguire, which helped him hit the crossbar against Iran.

‘One of the great English strengths is the screen: as in basketball, a teammate positions himself in Maguire’s trajectory and blocks him or forces him to go around him, freeing the Manchester United defender,’ they wrote.

His dominance in physical duels is also mentioned in the paper.

‘The Englishman exudes a lot of upper body power and uses his arms to gain an advantage,’ they said.

Maguire may not be the first name that comes to mind when thinking about England, but there is no doubt that England is looking to counter the threat of Kylian Mbappe.

Mbappe leads the tournament in goals with five, and he is in fine form after scoring a brace in the last-16 win over Poland.

Related Topics:England vs. France: Maguire and Mbappe target men
Up Next