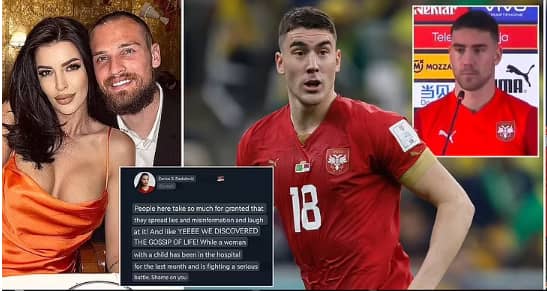 Juventus striker, Dusan Vlahovic has denied ‘absurd’ claims that he’s suffered a lack of World Cup game time due to an ongoing affair with a team-mate’s wife.

Vlahovic has started both of Serbia’s World Cup group games from the bench and even failed to make it onto the pitch for their recent 3-3 draw with Cameroon despite his impressive form of late.

His omission from the starting line-up raised questions before rumours broke out that he allegedly had an affair with Serbian team-mate, goalkeeper Predrag Rajkovic’s wife.

Serbian media reported that Vlahovic’s lack of minutes was because he had been caught in an affair with the wife of national reserve goalkeeper, but the forward has rubbished such claims.

Speaking at their pre-match press conference, Vlahovic said: ‘I am sorry to have to start the press conference in the World Cup this way, but I have to talk about it because this is my name being bandied about.

‘What we all read and hear about, there’s no need to comment on something so absurd. Evidently these people are bored and have nothing better to do because they are frustrated or angry, but working against the national interest of the team at the moment is obviously their main job right now.

‘We are more united than ever and the atmosphere in the squad has never been better. These stories are ridiculous, I just want to protect my name and my integrity, so I will take legal action if necessary.

‘It’s not the first time this has happened, I would’ve hoped that people would support the team before such an important match, but instead, we are forced to talk about things that have nothing to do with it.

Advertisement
Related Topics:Dusan Vlahovic denies reports that he's had an affair with his Serbian team-mate's wifeJuventus striker
Up Next