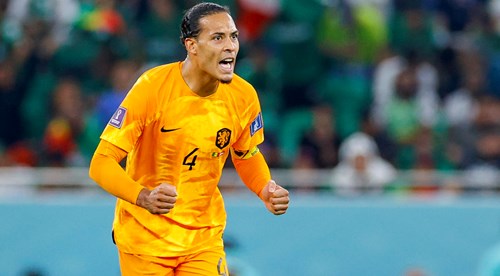 Despite opening their World Cup campaign with a 2-0 win over African champions Senegal on Monday, Netherlands captain Virgil van Dijk admitted that his team had much room for improvement.

“We won, but we also know that we can and must do better,” Van Dijk said after the Netherlands won the Group A match at Doha’s Al Thumama Stadium thanks to late goals from PSV Eindhoven forward Cody Gakpo and Ajax midfielder Davy Klaassen.

“We tried to force things forward at times, and we too often left ourselves vulnerable to Senegal’s counter-attacks,” he told Dutch broadcaster NOS.

“That is an area where we will need to improve because our next opponents, Ecuador, are very good at.”

“However, I am optimistic because I believe we will improve.”

The Netherlands are tied for third place in Group A with Ecuador, who defeated hosts Qatar 2-0 in the tournament’s first game on Sunday.

On the occasion of his 50th cap, Liverpool’s Virgil van Dijk made his major tournament debut, while Dutch coach Louis van Gaal gave Andries Noppert his first cap in goal.

The massive Heerenveen shot-stopper shone in the second half, with the pick coming from Idrissa Gana Gueye’s half-volley.

“Playing in a World Cup was a childhood dream of mine, but I never imagined it would be possible,” Noppert told NOS.

“It was really special when Frans Hoek, the goalkeeping coach, told me on Friday that I was going to play.”

“As the game got closer, I became more tense, but it was a healthy tension.”

“I’ve never played at an international level in club football, but you have to start somewhere.”

Related Topics:Qatar 2022: Netherlands'must do better' despite victory - Van Dijk
Up Next

Argentina, France launch title bids for Qatar 2022, with Messi at the center.