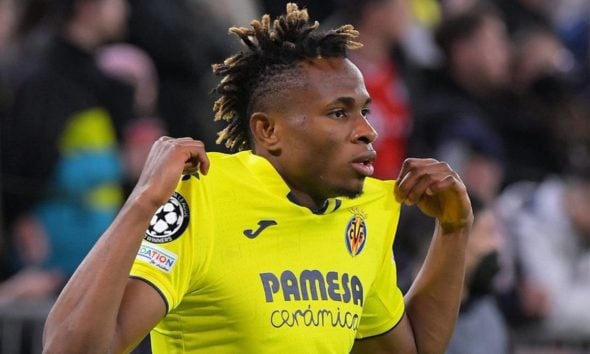 Nigeria winger Samuel Chukwueze would be a great signing for Premier League club, Aston Villa, according to analyst, Pete O’Rourke.

Chukwueze has been tipped to reunite with former Villarreal manager, Unai Emery at Villa Park.

Emery recently took charge at the Midlands club and is reportedly looking to raid his former club with Chukwueze among the targets.

The duo also enjoyed a good working relationship during Emery’s time in charge of the Yellow Submarine.

“When you get a new manager at a club they always look to sign players that they have worked with before and know. Chukwueze would be one of those that Emery trusts for Villa,” O’Rourke said.

The 23-year-old moved to Villarreal from Diamond Football Academy in 2018.

The pacy winger has scored 14 goals and recorded 15 assists in 94 appearances across all competitions for Villarreal.

Chukwueze, who currently has two years remaining on his contract, is valued around €20m.

Advertisement
Related Topics:Transfer: Chukwueze tipped to be a great signing for Villarreal
Up Next