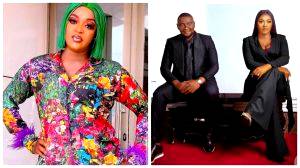 Chacha Eke, a Nollywood actress, has reportedly reconciled with her husband, Austin Faani Ikechukwu, months after she announced their divorce.

In June, Chacha Eke ended her nine-year marriage to the movie producer for the second time.

“I’m back on social media for the second time in two years, boldly declaring that I’m done with my marriage.” “My long overdue/unwavering stance on this is, of course, no surprise to Austin Faani, the doctors, or my parents,” she explained.

However, in a viral video that has gone viral online, Chacha is seen hinting that they are back together while speaking on Sunday at the House on the Rock Church in Asaba, Delta state.

Eke was repeatedly seen addressing Austin, who was also present at the church, as “my husband.”

The actress also discussed her battles with bipolar disorder and how it caused her to despise her husband and children, whom she referred to as “my treasured possessions.”

Eke also discussed a time when the disorder caused her to flee from home because “in my head, my husband wanted to use me for ritual.”

The actress thanked Austin for his help during a difficult time.

“I was supposed to go to the hospital, but I didn’t because my husband and I, who are seated here, were here to support me,” she explained.

“My husband and children are the most valuable treasures I have. But trust bipolar disorder to ruin my most prized possessions.

“When you have bipolar disorder, your favorite things and people become your worst enemy during an episode.”

Advertisement
Related Topics:Austin IkechukwuChacha Eke has reconciled with her husband
Up Next