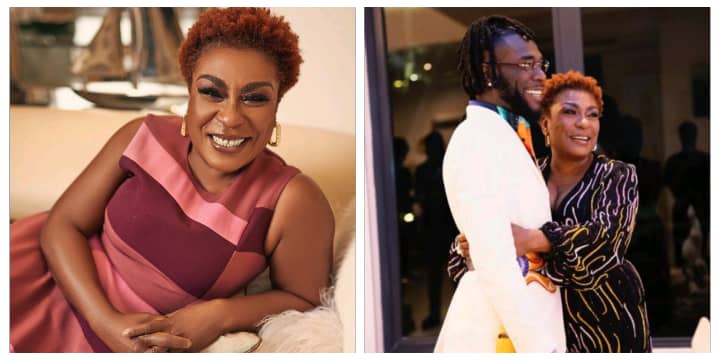 Bose Ogulu, the mother of award winning musician, Burnaboy, has given reasons she prefered to be addressed by her father’s name despite been married.

Bose revealed that she added her father’s name to her first name because she doesn’t want to be confused with another Idonije.

The mother of two, who is also her son’s manager, made this known at a dinner at Freedom Park in Lagos on Monday 16th January.

Bose, her husband, Samuel Ogulu, and her father, Benson Idonije attended the dinner in honor of Jahman Anikulapo,
a media executive in celebration of his 60th birthday.

The co-host of the dinner, Pamela Udoka, who was a senior colleague of Bose Ogulu in secondary school, informed Bose’s husband, Samuel, that the former preferred adding her father’s first name to her surname way back in secondary school.

Pamela stated that Burnboy’s mum preferred to be addressed as Bose Benson-Idonije, instead of Bose Idonije, during their secondary school days.

The host therefore pleaded with, her husband to allow her to be addressed as Bose Benson-Idonije, during the dinner.

In reaction to this, Bose stated that she insisted people address her as Bose Benson-Idonije, because she didn’t want to be mistaken for another Idonije.

Related Topics:“Why I Insisted to Be Addressed by My Father’s Name” – SingerBurna Boy’s Mother Reveals
Up Next

Ka3na to married men: negotiate for coming to my DM or else…

BBTitans: I don’t enjoy sex, I am bisexual – Nana